I think this should be looked at more closely for hidden commands/features. You all remember when he notes interface came out right? -- Abeckring 20:21, September 15, 2010 (UTC)

All games I've ever played which access to a unlimited dev console had 0 Easter eggs, so I think there are none as it IS the developers' console, not the gamers' console.

I'm sure they've only enabled commands for us, so if they forget to enable one its no big deal. If the reverse were true, forgetting to disable one command could have disastrous effects. Thus I'm sure they haven't taken that route.

Are you in the KBD lair or something? Calm down. Operating system (Ex. Mac, Window, Linux) and browser (Ex. Firefox, Safari, Opera)?

It works differently with different keyboards, I think, because my Brazilian QWERTY opens and closes the console with Alt Gr+ 2(²).

Should there be something that explains the FPS, Mem, In/Out, Offheap, and Cache?
Because personally, I'd do it, but I have no idea what they mean besides FPS is Frames per second, and stuff.
What's offheap mean for starters?
TzTok-Gas talk 13:52, September 26, 2010 (UTC)

Also please explain what we can do with this..... I opened it with my lack of any computer knowledge and starred blackly like 0.o for 15 minutes until my brain hurt and I just figured it served no purpose.

Most likely if you don't know what it means, it doesn't apply to you. :3

Dys Sliske talk 21:05, October 5, 2010 (UTC)
They're Java Virtual Machine statistics. The heap is an area of memory used as a pool for dynamic allocation. Presumably off-heap means memory storage not allocated from the heap. Ultimately, they all mean whatever the Jagex developers thought would be useful to help debug problems with the VM and performance. --Saftzie (talk) 21:19, October 5, 2010 (UTC)

Pressing "~", left of "1" on a standard QWERTY keyboard, should get you out.

What happens when my offheap gets to high? It turns red whenever it goes past 60k.

I don't see how the OSK would help but I would like to point out that the ` key is not only present on the UK layout but on pretty much every layout. But it does not work in all of these layouts. I tested UK, US, US-Int and Belgian and when using the UK and US layout Alt+` opened the console, and the key hosting the ` could not be used to type meaning on UK you can't type ` or ¬ and on US you can't type ` or ~. On US-Int and Belgian I was unable to open the console even when pressing Alt+` though I was able to type normally. The difference probably lies in the fact that on US-Int and Belgian the ` key is paired with the key it follows to create diacritics such as on è.

I can access the developer console on linux using ctrl+alt+` this may or may not be the correct keys but it is working. I'm using Ubuntu 14.04 with UK keyboard. I cannot confirm on other keyboards.

We need some more data to work out precisely what the things mean in the renderer command. The easiest way to give all the data precisely is an image, but just writing it down is also fine. Get multiple versions, for OpenGL and DirectX, if possible.

First off, safe mode seems to always be 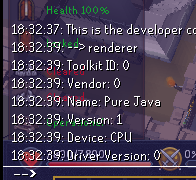 From what I've observed so far: