Does the corrupt DD have a special in free-to-play?

I saw some1 using this, and the player who used this, was attacking with it like b axe with attack,str or deff style!--Pvmatle

If you mean he was swinging it like a battleaxe, then that player was using the Aggressive attack style.

What would happen if the Dragon Dagger Corrupt was used until it was on the edge of crumbling and then sold? Karshí 14:03, April 17, 2010 (UTC)

The timer would probably reset if someone new bought it.

once worn it cannot be sold, so that ends that

as soon as you wield it it becomes immediately utradeable so dont accidentally wield it Natvsnat 08:02, November 16, 2010 (UTC)

The first paragraph states it can be poisoned on member servers and then it is contradicted in the third paragraph. On top of this, it is stated that there is no special in members servers in the third paragraph, and then a trivia entry says there is one. I don't know enough about the dagger to clear it up, but perhaps someone with more knowledge can fix it? LV 1 Blue Slime 15:59, May 26, 2011 (UTC)

As of Dec 2 2014, I have noticed the buy limit of corrupt dragon dagger is much larger than 10.

This image shows my transaction of 1k corrupt dragon daggers sold to myself for 110k. 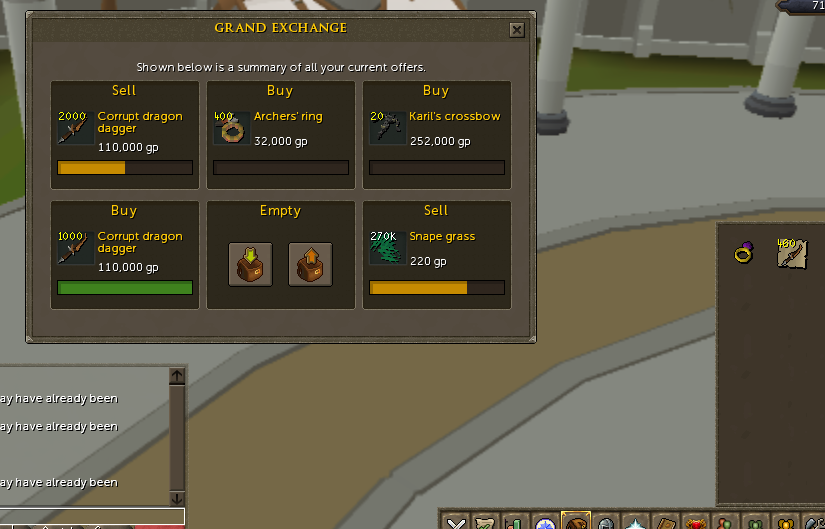 From just this image we can't judge that - we can't see whether you bought them all at once or over a very long period.

Btw, in the future please upload images like this to imgur instead of the wiki :)