I had the total amount of decorated fishing urns I was asked to make, but he didn't take them. If you look on the noticeboard it tells you if your task will give you a challenge bag or not.

Yes I think that's correct - for example the gem stall does not mention challenge bags, and no gems are taken. However the question of what happens if some of the items are lost, sold or crafted is different question. Rich Farmbrough, 11:26 20 September 2012 (UTC).
I had a task where I had to catch 72 leaping sturgeon and turn them in. Catching the sturgeon completed the task for me, so I did not bank the fish. When it came time to turn the challenge in he wanted the fish so I went and bought them. He accepted the fish I had bought, just as if they were the ones I had caught. Squirrel1256 (talk) 03:41, September 21, 2012 (UTC)

Both today and yesterday I have recieved a Dungeoneering task as my Daily challenge. The weird thing is though, the XP rewards I have been getting are outrageous such as 77k xp for the first task, and then like 86k for the second task. From this I have gained 4 Dungeoneering levels in 2 days on XP rewards alone. I was just wondering if anyone else was experiencing this, because any other skill XP reward is much lower. If it is a glitch, we made need to see what other skills are affected. Squirrel1256 (talk) 03:47, September 21, 2012 (UTC)

This is intentional. The experience gained for each skill is calculated differently based on typical experience gain rates during training. Other skills such as thieving have been generous for me too. ~J22f~TGC 00:58, November 2, 2012 (UTC)

Just thought I would make a note of this.

I thought it would be worth noting as a lot of people have been assuming they are one hit tasks which can only be assigned the one time.

Raw admiral pies are selling at upwards of 5k. True, they're a pain to make, but if you're in need of some cash, pretty much every item used in challenges is currently double to triple price. N1ghtshade3 (talk)

According to the articles I've been reading, we're supposed to be able to complete the daily challenges we get at our current skill level. However, I have the omni-potion challenge requiring me to make 10 saradomin blessing/zamorak's favour or guthix's gift potions. According to the Herblore Habitat articles, we have to be 81 hunter to catch God jadinkos which drop the vines needed to make these potions. I am 73 hunter. Technically, since I'm 84 farming and 79 herblore, I have the herblore level to make the potion, but I don't have the hunter level to get the seconds required for the potion. So, apparently is is possible to get daily challanges that you cannot complete at your current skill levels.

You really should avoid a challenge if the exp awarded + the exp gained doing the challenge is less then what you would get else where in the same amount of time. For a thieving task to be worth doing it needs to award alot more exp then what you get at the moment it's not good exp for Herrors & Elves it's bad exp. That's why you should avoid them.  —The preceding unsigned comment was added by 58.179.28.252 (talk).

The thing with that section is that it just dumps challenges to avoid onto the reader, while:
That's the issue with the section, really. It doesn't present a neutral point of view. It would be better if the section explained, with XP/h expected from inefficient challenges versus the XP/h gathered from the pages of more efficient activities, why a challenge is inefficient. Let the reader decide.

04:59, October 22, 2012 (UTC)
Is this section truly necessary at all on this particular page? Not only does NPOV come to mind when reading it, but there is a question of relevancy. This article is not a guide about which challenges are the "best" to do -- never mind that "best" is subjective and that different players have different preferences. I think it should be removed. --Andorin (Talk) (Contribs) 00:45, October 24, 2012 (UTC)

The way the section is currently written still doesn't meet NPOV for the same reasons as stated above. It should be completely removed and then replaced with a short note that say something like "For some challenges, the sum of the experience rewards and training experience gained during the challenge is less than the experience gained as if using the fastest training method. Thus players should keep in mind that completing challenges is not necessarily the most efficient way to train a skill." ~J22f~TGC 01:05, November 2, 2012 (UTC)

That's actually a great way to put it. I'll go ahead and add it to the article, modifying the text around it to fit.

The efficiency discussion doesn't account for opportunity costs of certain training types (Graardor may be inaccessible for some individuals) or the relative value of spin tickets. Gamerunknown (talk) 22:24, November 14, 2012 (UTC)

Manipulating which challenge is received[edit source]

Can a player be assigned a second challenge in a skill for which they already have an assigned challenge? If not, what happens when a maxed player only allows challenges from one skill? Or can players only turn off skills up to having five remaining? I could see players "holding" on to four uncompleted tasks in order to dictate which skill to get their daily challenge in. Do any maxed or near maxed players know how this works? ~J22f~TGC 01:10, November 2, 2012 (UTC)

I have a friend with a max cape and 118 Dungeoneering. She turned off every other skill, so she gets one Dungeoneering challenge per day. --Andorin (Talk) (Contribs) 04:37, November 2, 2012 (UTC)

So if a player cancelled every single skill, no daily challenge would be given? Nothing special here. (talk) 06:34, December 9, 2012 (UTC)

I saw that the prayer challenge - ourg bones 0/5 is listed as inefficient. It is not, and the reason why someone has gotten to that conclusion is that it's not the bones dropped from Graardor used in the calculation, which are cheaper and thus make the worth doing.

Is there a formula for calculating how much xp will be gained onced a challenge is completed? Does it depend on the level of that skill? I just finished my agility challenge and have 60k xp to level. I want to find out how much more xp I have to gain so that I'll level once I turn in my completed challenge. Thanks. 68.7.127.106 05:37, February 10, 2013 (UTC)

I noticed today that I can acces and use Challenges system. I'm a free player and those features have been locked, but now I can complete challenges (even some related to members skills, like Slayer). I haven't noticed any notification about this neither in the article nor in any update on the official site. I would update the page, however I cannot find any news and official information about this.--Mariobaryla (talk) 14:58, March 26, 2013 (UTC)

I've noticed that not all Daily Challenges that involve the creation of items require the player to turn them in. For example, the woodcutting and fletching challenges required me to turn in the logs and arrows, respectively, but the divination challenges did not require me to give up the gathered memories. Should we make a note of this in the article? --Ixfd64 (talk) 03:30, January 24, 2014 (UTC)

Well, if you look at the page where we actually list challenges, there is a column marked "Turn In", which indicates precisely that.

I noticed there is very little information on these challenges. I have an interface screenshot that I could contribute if needed. Also some info on the challenges, they last for 24 hours and do not count towards the 5 daily challenge limit.Eon27727 (talk) 05:25, February 3, 2014 (UTC)

So...for the wiki, I allowed a lucky challenge to expire. Once it reached 0 hours, I waited another hour, and it won't go away until I relog. I had pinned the challenge before doing so, and now the hint arrow remains but its unpinned. --Jlun2 (talk) 16:14, January 9, 2015 (UTC)

There's more than just ports and quests for lucky challenge: 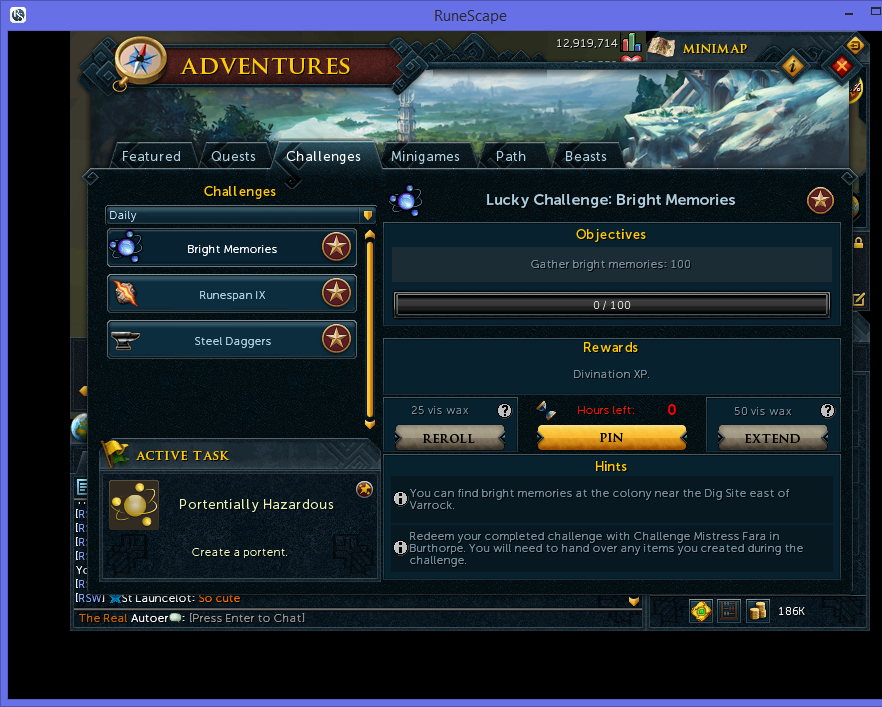 There seems to be a bug where members are getting the "Members Only Content" message when opening the Challenge tab, even while in members worlds. This bug also seems to be giving low-level (1-5) challenges instead of those appropriate for a player's skills. ~ Lhikan634 (talk) 02:13, August 6, 2014 (UTC)

When do challenges stop auto-pinning?[edit source]

Started a new account and every time I login it automatically pins a daily challenge. It also re-appears when switching between instanced/non-instanced area. (Enter CFB and task gets re-pinned, when returning after game is over task gets re-pinned again, etc.)

I thought it might stop when I reached x total levels. Currently at 201 total level and no relief in sight.

What time for new challenge?[edit source]

Can someone post at what time (+timezone) a new daily challenge is added? I can't find this anywhere.

It happens at daily reset, which is midnight UTC/game time.