Please be more descriptive. What are 'some gloves'? Pink Floyd Talk page • Vandalize my sig
Guestbook • My blatant violations of AGF Oil4 I made this 18:53, April 14, 2014 (UTC)

The item is literally called "Gloves", didn't have it before entering the minigame, but have them now. After getting the emote award I assume.
Closest thing I can find are the red Gloves
Edit: Was canifis gloves, no idea how I got them but I sure didn't do the quest needed for them, may have accidently picked up after minigame.
86.152.0.61 18:56, April 14, 2014 (UTC)

Right now there seem to be enough people on every world to start a game, but that won't necessarily always be the case. Shall we suggest an unofficial world so people can group more easily?

You can check how much bonus xp you can get in each skill by clicking on the reward panel, and set the slider to buy 10 so that it doesn't get rounded (you don't need to actually buy it.) At my levels I get offered the following. Bronzedagger (talk) 03:48, April 16, 2014 (UTC)

Here is my data:

So, that's interesting, it does vary by skill.

This is probably enough data to figure out the formula. 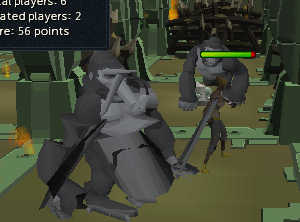 I was quite amused with one of the replies in the last campfire (archived [www.webcitation.org/6OuB5phNh here]): "Actually I think he would quite like it. Mock them as you will, Brassica and Marimbo have turned this differences into something that can be resolved with no bloodshed or violence. If anything they have created something joyous and fun out of their squabble."

Every limited-use ability I've seen says "rounds" in the description, but also has a note just below the description that say "Limited casts: # uses per game". This applies to both Flameproof and Light Fingers, and since I'm sure most people know by now that Flameproof is 3 uses per full game, I'd say the same applies to Light Fingers and the others. Jagex's wording hasn't been the best in my memory. Nothing special here. (talk) 15:03, April 24, 2014 (UTC)

Okay... so once the event ends, are we gonna keep it in the same page as the minigame? --

The quartermaster mentioned that Marimbo and Brassica Prime said a spell to make Saradomin's platform collapse and open into the arena, meaning it was already there. I'd speculate that the area is a Dragonkin dungeon due to the characteristic green stonework like the Brimhaven dungeon and Edimmu resource dungeon. Does anyone think Jagex might expand on this?  —The preceding unsigned comment was added by 65.110.235.61 (talk) on 18:14, April 18, 2015 (UTC).