I couldn't get a picture without the timer, sorry.

Telos' beams give buffs on you. His minion also has an armour break debuff that reduces your armour rating's effectiveness by 1% per stack. (I'm going to announce new buffs whenever I see any from now on...) NeutralinoTalk?

The Skilling Backpack XP Boost is another buff! So is Helwyr's bleed effect. NeutralinoTalk?

The perks that have icons atm. Note: Not all are listed under "invention perks"

Things that have been tried (they proc'd but no icon) and lacks (de)buffs:

Things I checked and right now, has no debuff/buff icon in game:

Does anyone know when were Supreme overload salve split into 4 different icons? It's now this: 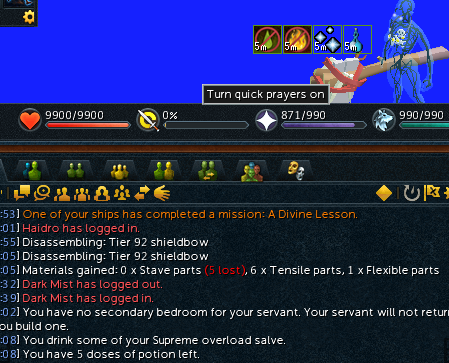 Nevermind for revolution; bottom of page seems to indicate it was likely beta only. Could probably check PVM videos to see when did salve stopped becoming an icon however. --Jlun2 (talk) 06:51, 8 August 2019 (UTC)