Should the possible reference to Beast of Burden by the Rolling Stones be included here? I know what the term "beast of burden" means, but I was just wondering if it should be included too.

﻿I just did a test because I wanted to know how long my brews would stay on the ground while fighting Nomad. I put a useless item greater than 3k so no one else could see it, then timed it. Exactly 5 minutes later, the item disappeared; this is contrary to what's stated on the page (which is possibly out-of-date). So I'm going to change it. Lefthandedkid 15:49, December 9, 2010 (UTC)

For fans of The Elder Scrolls Series[edit source]

Earlier a user (User:Atheist723) reported not able to place this into a BoB. I can't place dragon helms either despite worth less than 60k so I got the feeling either something's odd with dragon or Jagex is messing with this. --Jlun2 (talk) 13:46, December 28, 2014 (UTC) 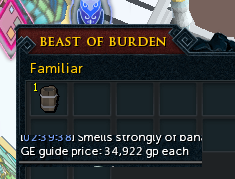 The whole section about withdrawing items while in combat is useless as you can now have the familiar window default to its inventory and drag/drop/switch items freely while in combat.107.72.162.113 23:31, August 9, 2015 (UTC)