With that blade weight as seen in the icon, it should be. Plus the irl ones are often considered hand-and-a-half'ers. One handed weapons would be used indoors, and Jagex never takes that philosohpy. Lastly, Japanese did not approve of shields. Sojurnstrs 16:39, March 2, 2012 (UTC)

Q:Does it have a special attack?

A:yes it hits with dragon claw speed but it hits 6 times with all hits being 25% strength bonus
^Liar^

Q:Does it really got the stats of a godsword?

^The Jagex wiki is wrong about many things, until there is more proof im not convinced that it has godsword statsDeathero 01:06, March 18, 2012 (UTC)

1. Does this weapon have the Kamae stances the Ornate Katana has? (When you character is Standing, Walking, Running, etc.)

2. Does this weapon have a special attack?

has anyone gotten one yet? it there any proof that it has any stats at all?

ok fine, but has anyone gotten one yet? the "offical" wiki is wrong about a lot of stuff.

I saw someone with it yesterday.

does it look the same?[edit source]

Nope, has a very small distinction. 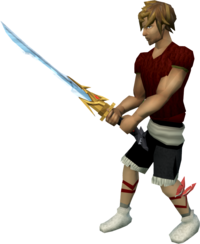 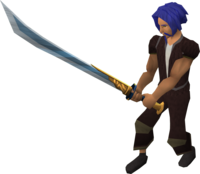 ok cool. it looks like the auspicious has a bigger Tsuba and Tsuka and a ragged edged blade.

Got the Auspicious Katana a few days ago (if you need proof see me ingame, display name is Zyver, I afk on w24 castle wars a lot).

Stats are the same as godswords.

Why do all the Lucky items suddenly have confirmation they are dropped under a gravestone? I've heard many, many times that they're not. Relatively (talk) 15:31, August 17, 2012 (UTC)

I read on the RS site that this month's event was the last chance to get this weapon. Now that it's been sold out (within 24 hours of the event starting I might add) does this mean now there's absolutely no chance of getting this? Brainwasher5 (talk) 05:44, March 13, 2015 (UTC)

I don't think so. It has always been on TH as a very very rare item (I won it like that back in the time). It won't be available through the store anymore unlike the other rares that weren't limited, but it'll still be available on TH like it always has been, as a very rare item. --JorisCeoen 08:25, March 13, 2015 (UTC)