Bork Shows in your Adventurer's log the first time you kill him.

I'm not sure how to reformat the page to reflect that this feature was released today. No news post has been made about it at the moment but the feature can be accessed via http://services.runescape.com/m=adventurers-log --Merrick178 19:42, October 26, 2009 (UTC)

I'm not sure that this link is working anymore. I guess I'll have to wait until this feature is officially released.--ItsMrPants 20:19, October 26, 2009 (UTC)

According to this blog, it was announced in-game.

Show The Hours We Have Played[edit source]

I am quite sure that my thread Show The Hours We Have Played was at least partly responsible for the creation of the Adventurer's log. It managed to get nearly 600 supporters in a little over 2 years, making it the 2nd largest thread in Website feedback. A few times in Q&As and general clan chat things players asked Mod MMG about it, so it must have had some impact on the RuneScape community. Do you reckon that it is safe to say that the re-inclusion of the time played came about as a result of the thread?? I thought that it was best for me to not decide since I am very biased.

Sorry, but I think unless a Mod said "this thread is why we did it" it can still be disputed. I think I read a Mod say that no single thread is responsible for an update, it is a conjunction of a lot.

I understand that (I was the one that actually asked Mod MMG that in a Q&A and it was published with a response along those lines), all I am trying to say is something along the lines of "the idea of the adventurer's log may have resulted from a popular thread in the Website Feedback forum requesting more information on players accounts. [cite!]". Nothing is certain in the sentence since it can't be confirmed. I do think that the thread is a part of the Adventurer's logs history.

No, I don't think Jagex saw a thread saying "Can we see our in-game played time?" and thought to make something completely different, with the time being a teeny tiny part of it. Lacesso 21:30, December 4, 2011 (UTC)

I don't think this wiki is about credit, it's about accuracy and results.

I don't know any players that have an empty log, but the image could be added, or the page archived, like is done for the non-members log.

My log had somehow recorded an NPC dropping an ancient effigy, though I am sure I never got one. Does the log record all valuable drops from notable NPCs, regardess of whether they were obtained by the player or not? --Limxzero (talk | contribs) 20:34, September 25, 2011 (UTC)

Yes, I think that even if you don't pick it up, it's listed. So you may have overlooked one.

The page says that KQ kills are shown on your A Log, but I have recently been soloing KQ and not a single kill has shown up on my A Log. Wasn't sure if this was just incorrect data or if perhaps solo kills just don't show up.

If it shows up, solo kills are even more likely to show up than team kills.

In that case I think I'll remove it for now until someone else proves otherwise. 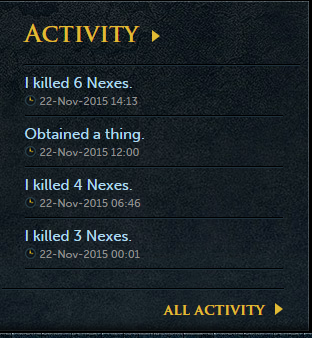 and the previous one for reference