Tai Bwo Wannai Trio is a quest continuing where Jungle Potion left off. The chief of Tai Bwo Wannai wishes your help in reuniting his sons, requiring you to seek each of the three out and help them in a specific task. One wishes aid in defeating the Shaikahan, another seeks the knowledge to catch Karambwan, and the third seeks some unusual foodstuffs before he'll return to the village. Completing their individual tasks requires coordinating between the sons. Upon completing said tasks, the sons return to Tai Bwo Wannai.

In Jungle Potion, the Shaman Trufitus communed with the gods to determine the fate of his people.

Now Timfraku, the Chief of Tai Bwo Wannai, wishes to see his people and family return to the abandoned village.

Help a depressed fisherman, encourage a raging hunter and satiate an eccentric priest in this extreme test of aptitude and patience!

Before beginning the quest, visit Musa Point. Purchase a bottle of Karamjan rum from Zambo in the pub, and if you don't already have them, pick up a banana from the table of the general store. Do not teleport or leave the Karamja island, as this will break the bottle of rum. Even teleporting to Karamja lodestone breaks it. You can get around this by adding the sliced banana to the rum; this new libation will not break when you teleport.

Begin the quest by speaking to Timfraku upstairs in the house west of Trufitus in Tai Bwo Wannai. He will tell you how the village hasn't fully recovered yet, and asks if you could find his three sons, Tamayu, Tinsay, and Tiadeche, and convince them to return to the village. 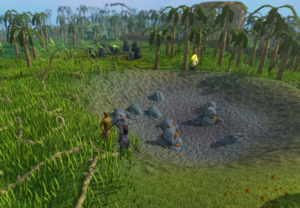 Tamayu is located near the mines south-east of the village.

Start with Tamayu, the first son. You can find him south-east of the village in the Karamja mining site (north of Shilo Village and east of fairy ring ckr). He will only return to Tai Bwo Wannai once he has killed the Shaikahan, his arch-enemy. Ask him when he will succeed and he will invite you to come along on his next hunt. Agreeing will start a cutscene of Tamayu fighting the Shaikahan. Afterwards, Tamayu will tell you that the Shaikahan is too agile, heals too quickly, and that he needs a better spear. Do not give him your spear yet. 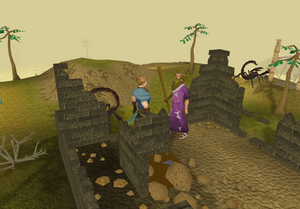 Tinsay is located on Cairn Isle.

Next, talk to Tinsay. Travel southwest from Tamayu to reach Cairn Island, west of fairy ring ckr and south of the graahks. You will need 15 Agility to climb the rockslide. Food is recommended, as the bridge has a high fail rate even at moderate levels of agility (if you walk rather than run, you will find it very hard to fail). You may also use the Surge ability (5 Agility required) to teleport most of the way across the bridge; doing so won't grant any Agility experience, but it will get you further across the bridge. Tinsay will tell you that he's trying to repair the tribal statue in the village, and you will offer to fetch him materials. He sends you to fetch three bizarre food items, starting with a bottle of Karamja rum with banana.

If you haven't done it already, right-click the banana to slice it, then use the sliced banana on the rum. Make sure you remember to slice before adding the banana to the rum because if you add it whole, you will have to buy a new bottle of rum and repeat the process. Give it to Tinsay and he will next request for a seaweed sandwich with monkey skin as bread.

Monkeys can be found wandering the jungle. Kill one, then pick up its corpse. Do not attempt to make the sandwich yet. Doing so results in a "stuffed monkey", which Tinsay does not want. You cannot make the sandwich without monkey skin, which can be made by Tamayu after you help him.

Talk to Lubufu, just northeast of the Karamja lodestone (a Brimhaven tablet will take you directly to him). At first, he will order you off; talk to him again. Talk about him, ask him what he does, and he will tell you that he mostly fishes karambwan, but he'll complain that his age and health are making it more difficult. Offer to help and eventually, he'll tell you part of the secret of catching a karambwan. Offer to get him some bait, and he'll tell you to catch 20 karambwanji; if you don't have enough inventory space, you can take more than one trip.

Go to the lake south of Tai Bwo Wannai and net fish for 23 karambwanji (the extra 3 are for later). Once you have them, return to Lubufu. He'll take 20, and after speaking to him again and asking him what he does with the karambwan, he'll ask you if you want to become his apprentice. Agree and he will give you a karambwan vessel. You can drop the vessel and tell him a shark ate it to get a second one, to save time later. Use a karambwanji on this to bait it. It's not necessary to fish any karambwan at the time, and doing so will require you to obtain more karambwanji. 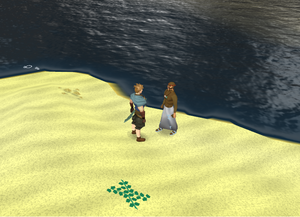 Tiadeche is located on the east island on the north shore.

Now find the third son, Tiadeche, who is located on the east island on the north shore, and can be reached most easily by fairy ring dkp. You need to use the baited vessel on Tiadeche. He will keep the vessel, and tell you to give an identical vessel to Tinsay to reverse engineer (after the spear is given). He will also offer you raw karambwan as a sign of gratitude for helping him.

To the south is a camp of jogres. Kill one of them and collect the jogre bones for later.

Return to a bank to gather the remaining items, if needed. Cook the raw karambwan on a range (there is one in Brimhaven). The logs are not for this step but rather a later step. The karambwan would turn into a light-green Poison karambwan, or a burnt karambwan. If you burn it, you'll have to obtain more, either by fishing them yourself (65 Fishing required) or buying them from players or on the Grand Exchange. 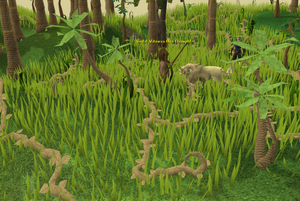 Return to Tamayu and use your karambwan poisoned spear and the agility potion (4) on him. Talk to him again and ask him to bring you on his next attempt to hunt. A cutscene will then follow where he will successfully defeat the Shaikahan and agree to return to Tai Bwo Wannai. Ask Tamayu to skin the monkey corpse you obtained earlier, granting you a monkey skin. If you aren't given the chat option to ask him to skin the monkey, you can use it on him for the same effect.

The monkey skin can be used with seaweed (found near the shores around the Cairn Isle bridge, if you don't already have one) to create the seaweed sandwich. Return to Cairn Isle and give Tinsay the sandwich. He will ask you to bring him marinated jogre bones.

At this point you can give the Karambwan vessel to Tinsay. After a moment he will give you a crafting manual, which can be given to Tiadeche in order to make him agree to return to the village.

If you already have the jogre bones and logs, instead of running all the way to Tiadeche and then back to Tinsay, you can complete the next section "Marinated Jogre Bones" without leaving Tinsay's area.

If you don't already have jogre bones, fight a jogre on the way to Tiadeche, just east of the log shortcut over the river. Jogres can also be found in the caves north of Tai Bwo Wannai village.

While preparing this portion, be careful not to bury the bones. Use the right-click option every time to be safe.

Right-click the bones and select light to burn them into burnt jogre bones (if you do not have level 30 firemaking you will require a furnace to make burnt jogre bones). Grind the last raw karambwanji (and make sure it's raw, the cooked version does not work) with your pestle and mortar to make karambwanji paste and add the paste to the burnt bones to get pasty jogre bones. Cook the pasty jogre bones on a fire (there are 2 fires just south of the village, or you can use your own fire) to make them into marinated jogre bones. Return to Tinsay and give him the bones. Be careful not to bury the bones, as this is still the first click option instead of 'Use'.

After eating the marinated jogre bones, Tinsay will agree to return to Tai Bwo Wannai. Bring Tiadeche the crafting manual if you haven't yet.

After you've convinced all three brothers to return, talk to Timfraku to finish the quest. Regardless of your response to him, you'll get a 2,000 coin reward. 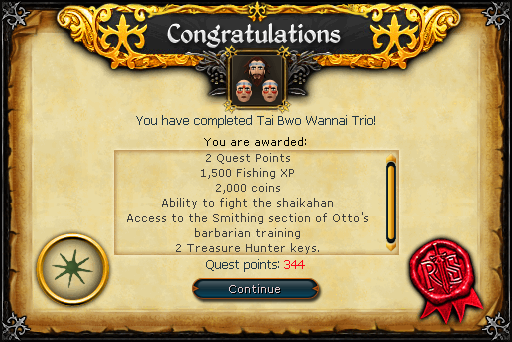 The three brothers can be found in the three small huts along the southern wall of Tai Bwo Wannai after the quest is completed. Each of them will give the player additional quest rewards.

Tamayu gives the following rewards when spoken to:

Tinsay gives the following rewards when spoken to:

Tiadeche gives the following rewards when spoken to: