From the RuneScape Wiki, the wiki for all things RuneScape
Jump to: navigation, search
The Old School RuneScape Wiki also has an article on: osrsw:System update 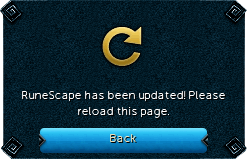 The message displayed when a world is offline for an update or maintenance.

A System update is when Jagex launch one or more of their updates to the main game engine of RuneScape. Updates are typically content-related; e.g. a new quest, a tweak/improvement to a recently released piece of content, or a rework of an existing section of game code.

Players are given a warning in the form of a 30 or 60 minute countdown. This countdown was previously three or ten minutes. When this reaches zero, all players logged in are automatically logged out, and the login server for that particular world is offline until the update is uploaded. The time needed for the update to upload varies with each reboot, although they usually take between 3 and 30 minutes. Extremely large updates, such as the Bot Nuke have been known to take over an hour to upload to the servers.

Players will have to reload the game client in order to log back in once the update takes effect. In addition to that, all NPCs (including Distractions and Diversions such as Shooting Stars, Evil Tree, Penguin Hide and Seek, etc.) and game objects (mining rocks, trees, etc.) will respawn when the servers are rebooted.

Some system updates involve just the system code being updated, without any content-related changes.