From the RuneScape Wiki, the wiki for all things RuneScape
(Redirected from Swept away)
Jump to navigation Jump to search
For the achievement, see Swept Away (achievement).

Swept Away is a quest originally released to accompany the 2008 Hallowe'en event. It revolves around helping the witch Maggie complete something special being cooked in her cauldron.

Maggie the travelling witch is cooking up something spectacular in her cauldron, but she needs a little help finishing it off. If you can help her out – and solve a puzzle or two along the way – she just might share some of the final product with you.

Begin the quest by speaking to Maggie, the travelling witch, just west of the Draynor Village lodestone. She wants your help to finish making her delicious goulash in the nearby cauldron.

To make the stew, she needs you to get her broomstick enchanted by her three witch friends: Aggie in Draynor Village, Betty in Port Sarim and Hetty in Rimmington; she would do it herself, but her sick ox, Babe, cannot be left alone.

The order of the friends you visit does not matter, but with each witch there is a puzzle. 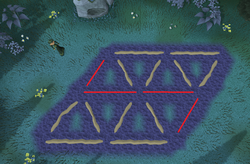 You must create a pattern containing four triangles.

Head south to Draynor Village and speak to Aggie, in the western-most house, about enchanting the broom. She tells you that the enchantment needs to be done in a special place, infused with 'magical pizazz'.

Agree to teleport, and you'll be taken to a small clearing, with a sand pattern created at the heart of it. Aggie informs you that a specific sand symbol contains hidden power which could be harnessed into the broomstick.

The arrangement must be created by sweeping four lines to end up with four triangles. One of the two solutions is shown to the right. Once you've completed the pattern, a surge of power will pass through the area and enchant Maggie's broomstick.

Next, speak to Betty in her magic shop located in Port Sarim, and tell her about Maggie's broom. Although she would be happy to enchant it, she requires her wand which is stored and locked up in the basement. Nevertheless, she suggests talking to her assistant, Lottie, for help in retrieving it. 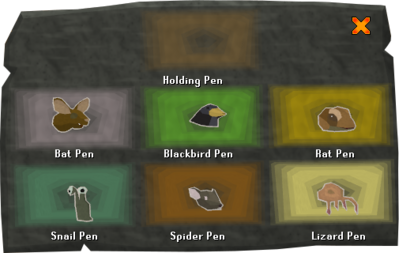 Climb down into the shop basement and speak to Lottie, who tells you that the wand is secure in the nearby chest and the key to unlock it is in the form of a puzzle - you need to put the menagerie in the southern chamber back into order.

Lottie will give you a magic slate that will help you keep track of the animals' locations while you are moving them around. Keep in mind that the animals can only be moved to a cage adjacent to their current one, and that you cannot have two animals in the same cage at the same time. The bat, snail and blackbird are already placed in their proper pens.

After completing the puzzle, open the chest and search it to obtain Betty's wand. Go back upstairs and hand over the wand to Betty, who proceeds to enchant the broomstick for you.

For the final enchantment, travel to Rimmington and speak to Hetty in her house located east of the town well. Instead of enchanting the broom, Hetty promises to concoct a 'theurgical broom ointment' that you directly apply on the broomstick. However, she needs a newt to complete it.

The three crates in Hetty's basement

Hetty has recently received a new package of newts and toads, so she asks you to simply retrieve a newt from her basement. Agree and go down the trapdoor south of her house. You'll meet up with Gus, the delivery ghoul, who explains that the three delivery crates - containing newts, toads, and a combination of newts and toads - have got their labels mixed up somehow and being phobic to newts, he cannot dare to look in and check each of the crates.

Gus requests you to help him label the crates correctly, keeping in mind that ALL the crates are wrongly labelled and that you can only remove ONE sample from any ONE crate. He gives you three labels to apply on the correct crates: Newt label, Toad label and Newts and toads label. The combination is different for every player.

To solve the puzzle, you must remember that every crate is labelled wrong, and that you are only allowed to choose the sample from one crate.

If you make a mistake, Gus will let you know and you can start over. Just keep trying the possible combinations from the table below until you get it right (sometimes it may glitch and he will only say "don't touch the crates without my permission").

After you've successfully labelled all the crates correctly, take a newt out of the newt crate and head back to Hetty. She'll apply some newt slime to the ointment and pass it back to you; use this mixture on the broom to enchant it. 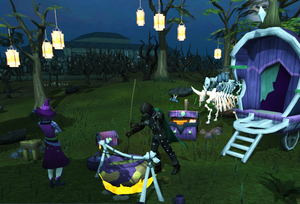 Using the broom to stir the goulash

Bring the enchanted broom back to Maggie. She tells you that since you are the one who enchanted it, you get the honour of stirring the goulash with the 'good stuff'. Stir the goulash in the cauldron with the broomstick and talk to Maggie again to receive a bowl to drink the goulash in. 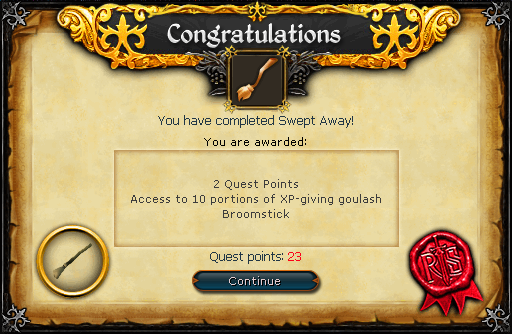 Swept Away is directly required for the following quests/miniquests: