From the RuneScape Wiki, the wiki for all things RuneScape
Jump to navigation Jump to search
This article is about the fishing spot. For other uses, see Swarm (disambiguation).

The swarm is a type of fishing spot found at the south-western section of the Deep Sea Fishing hub. It has no requirement to use besides access to the hub itself, which requires level 68 Fishing.

The player's Fishing level determines the fish that are caught. Like the Ourania Runecrafting Altar[1], it is possible for a player to catch fish that they lack the Fishing level for, but with a relatively narrow range. For example, raw sailfish can be caught without 97 Fishing, but it is more common at higher levels; by 94 Fishing, sailfish amounts to about a third of the catch, while any fish lower than raw cavefish (85 Fishing) is very rare. Boosted or drained Fishing level seems to have little to no effect on the quality of the fish.

Raw monkfish may be caught here without the completion of Swan Song.

Raw great white sharks may be caught here without purchasing the prawn perk from the Prawnbroker. Golden fish eggs may also be caught here.

Fishing at the swarm yields around 130,000 experience per hour at level 99 Fishing. The nearby magical net is useful for quickly banking the fish caught.

Unlike other fishing spots, the swarm does not move, but instead, there is a 1/150 chance that the player will stop fishing, with the message: "A fish snags against the net." 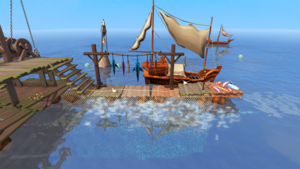 This fishing spot has access to the Deep Sea Fishing shared loot table, which is a tertiary drop.
Luck-enhancing items are not required to access the table.