From the RuneScape Wiki, the wiki for all things RuneScape
Jump to: navigation, search
Swagger Stick? (edit)

The Swagger Stick is a weapon that could be gained as a super rare prize from the Squeal of Fortune. It is currently obtainable through Treasure Hunter as a promotion item. When it is equipped, the player will gain new standing, walking and running animations. It was removed from the Squeal of Fortune after a promotion that made it temporarily more common. After being unobtainable, it was made once again obtainable from the Blast from the Past Treasure Hunter promotion between 27 February and 3 March 2014. It was made once again temporarily obtainable via Vic the trader in Burthorpe on 29 September through 3 November 2014, where players could exchange bonus experience for credits, which in turn could be exchanged for the Swagger Stick (for 2,000 credits) and several other rewards. It is now obtainable as a rare reward from large parcels from the Parcels from the Hedge event whenever the event is active in-game. 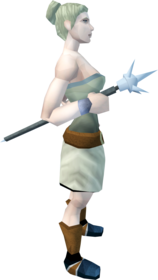