Sven's last map is the last map Sven the Helmsman managed to create before he had died. Players obtain it during Olaf's Quest, where the map shows the location of Brine Rat Cavern, which players can only access by digging at the X by the windswept tree with a spade on the nearby mountain.

In order to receive this item in Olaf's Quest you have to give Olaf's wife, Ingrid Hradson, a crude carving and his son, Volf Olafson, a cruder carving, donating food to Olaf, and relighting his nearby fire using damp planks. 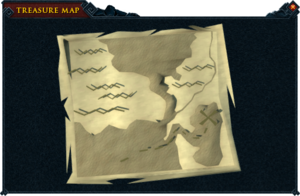 The place to dig is shown with an X on the map.