From the RuneScape Wiki, the wiki for all things RuneScape
Jump to: navigation, search
The Old School RuneScape Wiki also has an article on: osrsw:Surprise Exam 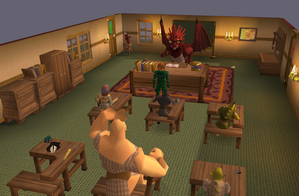 Surprise Exam was a random event that was released in Game Improvements, 17 July 2007[1] and removed in Halloween 2012: Haunted Houses, 24 October 2012. The Mysterious Old Man teleported players into the classroom. The event had a school theme because it was released at the start of the summer holidays in England. When it was released, Jagex described the random event with the quote: "Just when you thought school was out...SURPRISE! It's an exam for you!" 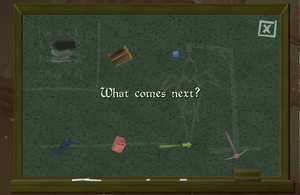 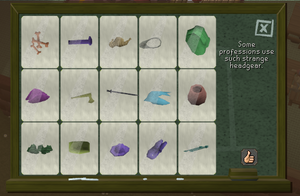 The player had to answer three questions from Mr. Mordaut, a red dragon who was the "teacher" in the "classroom" of several non-attackable monsters. Each of the questions were chosen randomly from one of two types.

In the first type of question, players were presented with a set of three items, and they had to choose a fourth item that matched the theme of the other three.

In the second type, fifteen random items and a clue were given to the player, and the player had to choose exactly three items that related to the clue. If players answered questions incorrectly six times, they would be teleported to a different location upon leaving the room.

Players were then given a Random event gift as a reward upon returning to their location prior to the event. However, players could only possess one gift at a time; if a player already had a gift in their inventory, 500 coins were given instead. 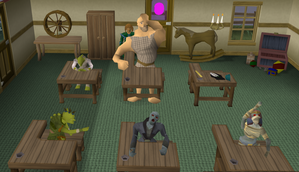 A view of the students