From the RuneScape Wiki, the wiki for all things RuneScape
(Redirected from Surok)
Jump to: navigation, search
The Old School RuneScape Wiki also has an article on: osrsw:Surok Magis
Loading...
FrailDagon'Hai

Surok Magis is the head of the Dagon'hai order. He has been currently attempting to gain control of Varrock, a plot that is exposed and thwarted during the What Lies Below quest. Surok is an older wizard, although his power should not be underestimated, as he is capable of using very powerful magic and summoning fearsome and incredibly strong creatures. He has a rather short fuse and quickly gets angry at people. At times, he is overconfident of himself and when his plans fail anyway he wants vengeance, like the stereotypical villain. He is a loyal follower of Zamorak.

He has a disguise known as Dark Squall, which appears during the While Guthix Sleeps quest.

Surok Magis has resided in Varrock at least since Year 160 of the Fifth Age, as he is listed on the Varrock Census of that year with the occupation of mage.

Surok Magis is the successor of his father, Sin'keth Magis, who led the Dagon'hai after the discovery of the Tunnel of Chaos and exile from Varrock. Surok eventually returned to the Tunnel of Chaos years later with his followers after almost all knowledge of their organisation had faded. In year 169 of the Fifth Age, Surok decided to avenge his father by committing a silent coup d'état and turn King Roald III into his puppet.

The following takes place during What Lies Below. 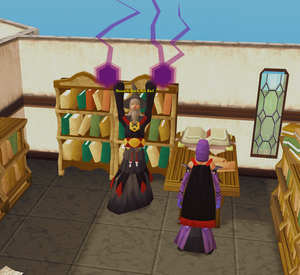 Surok possesses King Roald of Misthalin to do his bidding.

Surok came to the Varrock Palace library where he met Rat Burgiss, the leader of the Varrock Palace Secret Guard (Surok was unaware of this fact at the time). Rat, aware of the danger Surok posed, had him guarded in the library so he could not do anything. Rat then sent an adventurer to give Surok his final warning. Upon meeting the adventurer, Surok claimed that he was working on a special ceremony but needed certain materials for it and tricked them into delivering these materials for him.

Surok gave the adventurer Sin'keth's diary and a wand and sent them to infuse it with energy at the Chaos altar. After giving the infused wand to Surok, he wrote a message for Rat and asked the adventurer to deliver it. When the adventurer delivered this, Rat revealed himself as a member of the VPSG and told them of Surok's true plan: to take over Misthalin. The adventurer switches sides after hearing this and was sent to ask for help from Zaff, another member of the Palace Guard, who provided them with the beacon ring to take down Surok.

As the adventurer approached Surok, he used the infused wand to take control of King Roald's mind and ordered him to kill the adventurer. The adventurer then fought the king and activated the beacon ring to teleport Zaff to the library. Zaff countered Surok's mind control spell, disabling his magic and freeing the king from his control. Surok attempted to escape, but Zaff cast teleblock, imprisoning him in the library. 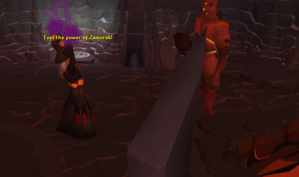 Surok killing a fire giant during his escape.

The following takes place during Chaos Tunnels: The Hunt for Surok.

Surok somehow escaped the Varrock Library and fled to the Tunnel of Chaos where he was confronted by the adventurer again. In an attempt to escape, Surok used a portal to teleport away. The adventurer forced Dakh'thoulan Aegis, Surok's second-in-command, to reveal where Surok had gone and they were directed to the Chaos Tunnels, where Surok had escaped to. After chasing him through the tunnels and fighting the monsters that reside in, the adventurer finally caught up to him. Surok then summoned a tremendous ork called Bork to kill the adventurer. Bork and his ork legions, backed up by Surok's powerful magic attacks, fought the adventurer, but were defeated. Surok then teleported away again to an unknown location.

After his defeat, Surok disguised himself as Dark Squall and kept visiting the Chaos Tunnels, appearing in random places for short periods of time. 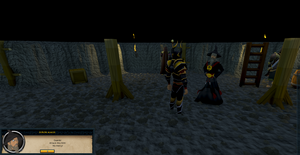 At some point in the Year 169 after this, Surok, as Dark Squall, was approached by the Mahjarrat Lucien. Lucien was working towards ascending to godhood and to do so, he needed to find the Stone of Jas. In order to keep himself informed of events around the world and eliminate any opponents, Lucien established a large network. In an alliance with the Dagon'hai and the Kinshra, Lord Daquarius gave Lucien a legion of elite black knights and Dark Squall was appointed as their leader. The disguised Surok subsequently took up residence in the Kinshra Catacombs, from where he led his troops. In his office was a special teleportation panel from where he could access Lucien's camp in the north if necessary.

Dark Squall as seen on a wanted poster.

Soon, an alliance between Crux Eqal, the Guardians of Armadyl, and the Temple Knights found out about Dark Squall from a spy under influence of a truth serum. They then agreed to send a spy, Silif, to investigate the Catacombs and search for him. Silif was captured and imprisoned, however, and the adventurer was sent to rescue him. Disguised as two Kinshra agents, they saved Silif and then approached Dark Squall himself. As they planted a teleorb in Dark Squall's pocket to teleport him to a prison, Surok recognised the adventurer and removed his disguise. Surok ordered his men to kill the adventurer, but they got away.

Back in Falador, the adventurer disguised themselves as Surok using a set of Dagon'hai robes and a 'teleswitch' was performed inside a jail cell; the adventurer was teleported to the Catacombs while the real Surok was teleported into a teleblocked jail cell in the Falador Castle. The adventurer then made their way to Lucien's camp while Surok was incarcerated, and he stays there after the battle with Lucien. 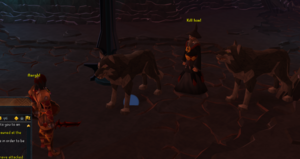 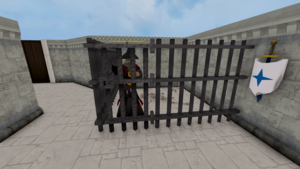 Of all the luck!

Do you really wish to die so readily? Are you prepared to face your death?

I am Surok Magis, descendant of the High Elder Sin'Keth Magis, rightful heir of the Dagon'hai Order!

These petty distractions are an annoyance. Feel the power of Zamorak!