Supreme Commander Bisi is the leader of the Dwarven Black Guard, the primary military and police force of the dwarves.

The Supreme Commander is responsible for managing all of the lower commanders, such as Commander Veldaban and Captain Lawgof. As the Black Guard's leader, he is also responsible for making many of the army's larger decisions, mainly concerning the management of funds. Bisi is currently stationed in Keldagrim, hidden in the Black Guard headquarter's upper level. Guarded by several Black Guard Berserkers, he is often overlooked by visitors.

He is also responsible for maintaining discipline and standards within the Black Guard. When Commander Veldaban refused to apprehend a thief and went off drinking with her instead, he reprimanded the commander, reminding him that he was supposed to be focusing on crimes in West Keldagrim, as nobody cared about what happened in the East. [1]

Upon completion of The Giant Dwarf, he also begins to investigate The Red Axe, but he loses Commander Veldaban after a particularly tense disagreement over how to contend with the Red Axe. He subsequently appoints a successor. 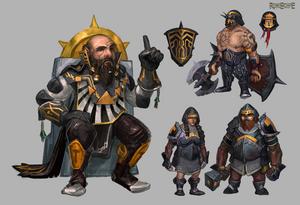 Concept art of Bisi and other Black Guard.