Sunglasses are members-only items introduced on 2 February 2015 that became available from the rare token store on 12 March 2015. They were also available on Treasure Hunter from 13 March 2015 0:00 UTC to 16 March 2015 23:59 UTC, and became "Limited Rares" on 21 June 2017 00:00 UTC to 26 June 2017 23:59 UTC with the Rare Refresh update in the rare token store. After its removal on 25 January 2021, the sunglasses were made available through the Oddments Store. They have 7 different shades that can be swapped at any time. When worn, they act as a mirror shield against basilisks and cockatrices, and will do so for Ironman players as well when bought with oddments.

Currently a possible reward from the Antique chest. 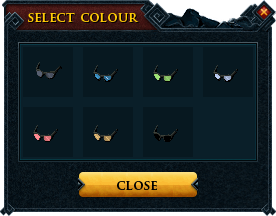 Sunglasses have 7 available colours; recolouring changes the lenses while the frames remain black.