From the RuneScape Wiki, the wiki for all things RuneScape
Jump to navigation Jump to search
"Sundial" redirects here. For the quest item, see Sundial gnomon.
Sundial (Menaphos)? (edit)? (edit) 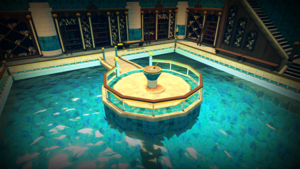 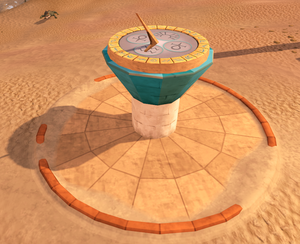 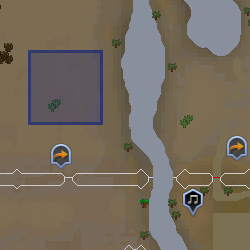 Sundial (Menaphos) is a sundial found in the Grand Library of Menaphos. It was previously found to the north of the city, just south of the Exiled Kalphite Hive. It has the symbols of Tumeken, Elidinis, Amascut and Icthlarin on it, and can be interacted with to rotate the sundial gnomon to point to letters in the Menaphite language.

It is involved in the Golden Path Challenge, part of the buildup to the release of Menaphos, where various words can be entered into it in order to progress. Right-clicking the sundial north of Menaphos allowed you to 'plunder' it. The plunder option could be used to view a previously received message by entering the correct words into the sundial.

The location of the entrance to the Grand Library.

This information has been compiled as part of the update history project. Some updates may not be included - see here for how to help out!
Retrieved from ‘https://runescape.wiki/w/Sundial_(Menaphos)?oldid=35656406’
Categories:
Hidden categories: