From the RuneScape Wiki, the wiki for all things RuneScape
(Redirected from Summoning icon)
Jump to: navigation, search
The Old School RuneScape Wiki also has an article on: osrsw:Minimap 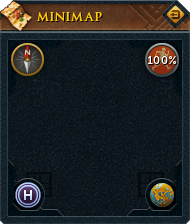 The Minimap (also called mini-map in RuneScape documentation) is the area of the game interface in the upper-right of the screen. It shows a bird's eye schematic of the player's surrounding area, with the player at the centre. It does not show the map in certain areas, such as in the Barrows and Puro-Puro.

White lines represent walls, fences, etc., while a red marker indicates a door or other penetrable features. Coloured dots act as markers to identify nearby items, players, monsters and NPCs (see below for more details). Certain buildings, including most shops, and features such as water sources and quest start points are marked by unique icons.

Players can navigate by clicking directly on the minimap itself. A red flag will appear to show that the server is moving the player to the area clicked on; however, if one tries to enter a location that is inaccessible (due to a door being closed, or some other obstruction) then either nothing will happen, or the game will move your red flag to the nearest point that you can travel to.

There are no markers for followers.

The scale of the Minimap is equal to that of the official Java-based World Map at 100% zoom, or exactly 16 pixel-lengths2 = 1 square. Alternatively, the conversion 4 pixel-lengths = 1 square-length may be used. When perfectly aligned along the horizontal and vertical axes, the Minimap displays a circular area with a radius of exactly 19 square-lengths.

There are five icons, located in the four corners of the minimap.

The logout button is located in the top right, above the run energy icon. When the interface is locked, the logout option will be merged with the run options.

The "N" arrow represents north, and the other (unlabelled) arrows represent the other directions, as with a standard compass. The other directions used to be labelled, but that was taken off because in many languages the words for west, south and east don't begin with "W", "S" and "E" while "N" for north works for most languages. Clicking the compass faces the camera directly north and slightly elevated. Right-clicking the icon displays the freecam option.

The Energy icon shows the player's remaining energy, or how long one can run before walking. A player can also click on it to toggle running on or off. The background will also drain as energy is reduced. The option to rest is accessed by right-clicking the Energy icon, enabling you to charge both your life points and run energy at twice the normal rate. When the interface is locked, the logout option is merged with the run icon.

The Home Teleport icon will open the lodestone network interface. In dungeoneering, it will cast the dungeoneering home teleport.

The World Map icon, when clicked, will bring up the World map. When clicked in an un-mapped dungeon or during a Random event, the view will default to the Lumbridge Swamp. In dungeoneering or a clan citadel, it will open an area-specific map instead of the world map. Right-clicking the icon displays the world hop option and skybox/filters option.

When the player is at their clan citadel, the world map icon is replaced with the clan citadel map icon. See this page for more information.

Note that these icons used to appeared while players were in PvP worlds. PvP worlds no longer exist due to an update.

Level range for a player with Combat level of 95+6

The Countdown timer icon appeared when players entered "safe zones" while in combat. When the 10-second timer is still active, the player could still be attacked and killed even while in a "safe zone". 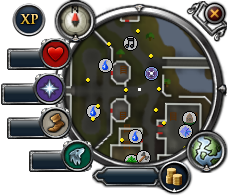 The following were attached to the minimap, but were moved with the release of Runescape 3: 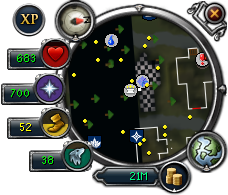 A glitch where part of the minimap failed to load.

RuneScape's minimap is often the victim of persistent glitches. The first reports of players experiencing glitches with the graphical interface of the minimap came roughly around 21 November 2009.

The most frequently-occurring glitches include:

All of the above are almost always loading errors, not nonexistent files on the server-side. The first two glitches can usually be temporarily fixed by "reloading" the minimap, via methods such as teleportation, logging out and back in, entering an entrance to another map and returning, open the world map and close it immediately, or simply moving a distance and returning. Changing RuneScape's graphics display mode might help as well.

The collective glitches have no effect whatsoever on the actual location, and typically do not pose harm to players, unless a player is disoriented by the minimap issues in a dangerous/competitive area that may or may not rely on the minimap. Still many players have become accustomed to the graphical glitches and so tend to ignore the problems.