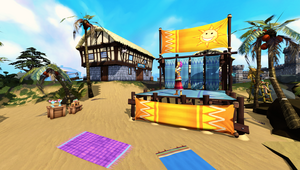 Reyna's stage during the events

The Summer Beach Party (also called The Beach since 2016) is a recurring yearly seasonal event that takes place during the summer. While the event is active the Lumbridge Crater is transformed into a beach. The event is organised by Battle of Lumbridge survivor Reyna.

During the event, players can take part in a number of activities to unlock cosmetic overrides, titles, and emotes. There are new rewards and activities every year, and previous rewards are available for unlock during any year of the event.

This list is automatically generated based on the values on each individual title article. If it appears to be outdated, purge the page by clicking here

This information has been compiled as part of the update history project. Some updates may not be included - see here for how to help out!
Retrieved from ‘https://runescape.wiki/w/Summer_Beach_Party?oldid=35872010’
Categories:
Hidden categories: