From the RuneScape Wiki, the wiki for all things RuneScape
Jump to: navigation, search
This article is about the unannounced phenomenon. For the submarine involved in the quest Hunt for Red Raktuber, see Red Raktuber.

Submarines are a hidden update that occurred on 27 May 2009 in which periscopes started appearing around some parts of the RuneScape coastline as part of the pre-release of the next quest in the penguin series, Hunt for Red Raktuber. The quest was not released until 2 June 2009, 6 days after the release of the submarines. At times the periscope is submerged, so players may have to wait before it appears above the surface of the water. The submerged submarine can be seen in Standard Detail, as it is shown as a dark shadow. The periscopes cannot be examined.

The following locations show a periscope appearing out of the water:

Currently, the only known submarine is the Red Raktuber, the key focus of the quest Hunt for Red Raktuber.

The crew of Red Raktuber consisted of:

During the run-up to the release of the quest, there were several hints and theories concerning the involvement of penguins and the mention of the Red Raktuber.

In a player-submitted poll[1] there was a question asking "What do you think that the penguins have been up to since the Cold War quest?". One of the top-voted answers was "Building a yellow submarine." Whilst this was not a guaranteed poll, it may have had some influence on the resulting storyline. 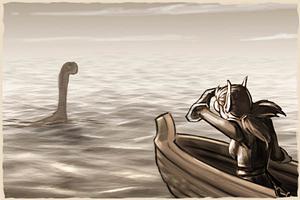 The artist's impression of Zanik seeing the "Sea monster".

In Postbag from the Hedge 40, Zanik talks about her adventures from her visiting Entrana, then coming back from there and going around Mudskipper Point in which she sees a "Sea monster" in the water.

This was probably the submarine periscope, although a pirate thought it was a "Leviathan" and the artist's impression included in the letter resembles a Loch Ness Monster. Immediately after Zanik's letter, Postie Pete also makes a comment about the sea monster.

Note the ellipsis (...) before the text "creature", Postie Pete is unsure if it is a creature or not.