From the RuneScape Wiki, the wiki for all things RuneScape
Jump to navigation Jump to search
The Old School RuneScape Wiki also has an article on: osrsw:Study

A Study in a player-owned house is a room where the player can create teleport or enchant tablets by using soft clay on a lectern (providing you have the runes for the tablet).

It also holds the crystal ball that can be used to change the element of staves and battlestaves, and spy on Shooting Stars with the telescope.

The study has three entrances/exits. This allows the player to use it as a straight room or a corner room.

There are 7 different hotspots available:

A large orrery in its usual movements.

The globe serves only a cosmetic purpose and has no known use apart from decoration.

A player creates tablets with the Mahogany Eagle Lectern. 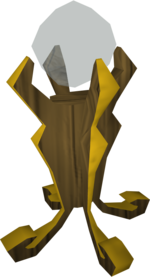 Just like in a real house, if the telescope is blocked by another room in the house, it will not work and your character will say, "What's this? A close up of a wall," though if a roof is mostly blocking its view, no problems will arise.

Bookcases can be used to browse through all the books players have unlocked during their adventures. Each bookcase can store the same number of books, regardless of type. All bookcases can be made as flatpacks in a player-owned workshop.

The Supplier price does not include the price of logs.

If you wish to move this room, you may visit Varrock museum and ask for a new plinth. When you replace the room and add this new plinth your statue will be restored to its previous state. You cannot build a second statue in another room, even if you completed the first one.