From the RuneScape Wiki, the wiki for all things RuneScape
Jump to: navigation, search
The Old School RuneScape Wiki also has an article on: osrsw:Strongest monster 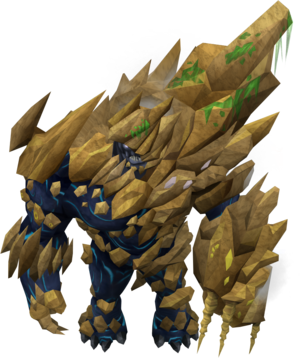 Vorago, the current strongest monster in RuneScape, shared with Yakamaru and Seiryu the Azure Serpent.

The Strongest monster in RuneScape (based on combat level) is currently tied between Vorago, Yakamaru, and Seiryu the Azure Serpent, all with a combat level of 10,000. There have been certain monsters with very high combat levels released during temporary events that are not permanently available to battle in-game; these monsters are not included in the following lists. Unattackable NPCs that have combat levels, such as the level 9001 Ferret of Doom and its friends, are also not included.

This is a list of the current 10 highest levelled bosses in the game. Enemies encountered during boss encounters aside from the boss itself, such as summoned minions and obstacles, are not included.