Striped vines are drops from tracking and catching hunting camouflaged jadinkos. They can be given to Papa Mambo and he will ward a certain breed of jadinko off for 15 minutes per vine. When asking Papa Mambo about warding off, he will let the player choose what type of jadinko they want to ward off, using an interface, and how many vines they want to spend on it.

The warding effect is cancelled upon logout. 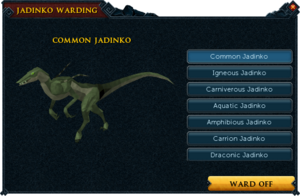 The interface when warding off jadinkos with striped vines in inventory.

This information has been compiled as part of the update history project. Some updates may not be included - see here for how to help out!
Retrieved from ‘https://runescape.wiki/w/Striped_vine?oldid=35653215’
Categories:
Hidden category: