Straven Enroy is one of the leaders of the Phoenix Gang, a notorious criminal gang operating in Varrock. He runs operations out of the VTAM Corporation headquarters, which serves as a legitimate front for their less-than-legitimate activities.[1][2] When asked for a job with the Corporation, he advises checking the jobs section of the Varrock Herald, where they advertise openings.[3] He is a master thief, and as such holds one of the master thief's armbands. According to the Varrock Census, he is a "Legitimate Businessman".

The gang has a rivalry with the Black Arm Gang. Previously, the two gangs were united, but infighting amongst the gang caused the shield of Arrav, which they had recently stolen from a museum, to become broken. Katrine and her underlings left to form the Black Arm Gang, taking what they could with them, including half of the shield, leaving the other half with the Phoenix Gang.[4]

Should Straven be asked about joining the gang, he will deny all knowledge and speak in hypotheticals, advising adventurers of what it would take to join the gang.[5] He requests an intel report from Jonny the beard, after which he welcomes them into the gang and provides them with access to the weapon store. Should they swap gangs, he calls them a dog[6] but gladly welcomes them back if they request to rejoin the gang.[7]

Members of his gang are after the candlesticks held by ScarFace Pete, calling them valuable.[8] He gives the adventurer a master thief's armband in a fit of generosity when they get the candlestick for him.[9]

In the alternate reality of New Varrock, he continues to lead the Phoenix Gang as a zombie. When Zemouregal took over the city, the mahjarrat came to him and demanded his half of the shield. Straven hid in the VTAM headquarters, and Zemouregal killed then zombified him.[10] Their phoenix mascot was later abducted by Lowe.[11] He tasks adventurers with recovering a phoenix egg. The zombified gang has several new members, such as Jonny the beard.

Straven appears in the Varrock Census taken in Year 160 of the Fifth Age with his occupation listed as "legitimate businessman". 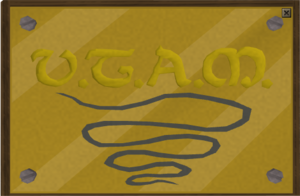