From the RuneScape Wiki, the wiki for all things RuneScape
(Redirected from Strange rocks)
Jump to: navigation, search
For the golden variant, see Golden rock.
"Sr" redirects here. For the Distraction and Diversion, see Soul Reaper.

A strange rock is an item from the Shattered Heart Distraction and Diversion. It may be found randomly while training any non-combat skill released before March 2010. As such, Archaeology, Divination, Dungeoneering, and Invention are not included. Each strange rock is a segment of the statue of Dahmaroc, a wizard from the Second Age.

Players may get two strange rocks per skill. The rocks are awarded at random per action, so consider training a skill in a way that many quick actions are performed. The chance to get the second rock for a skill is reduced.[1]

After the statue of Dahmaroc has been completed, players may then again get two strange rocks per non-combat skill to once again complete the statue. The first time a player completes the statue, they will be given a statue plinth by Barnabus Hurma to place in their player-owned house.

Players that try to add a strange rock to the plinth for the very first time will be stopped by Barnabus Hurma. By speaking to him and showing him the strange rock, he will then tell the player that they need to find its twin before adding it to the plinth. Barnabus Hurma will also give players a statue collection bag to store all collected strange rocks, thus freeing up space in the player's bank or inventory. Strange rocks do not stack in the bank, even if they are paired.

If the player wishes not to receive rocks anymore, they may speak to Barnabus Hurma to toggle them off. They can be turned on again.

Players are allowed to create only one statue per week, where a week is based on when you added your last rock, not on the weekly reset. It is possible for the player to build the statue once and then go out and re-obtain all rocks in the same week and place all but the final set of rocks in the Museum statue prior to the expiration of the week. However, if the player attempts to place the final set, Barnabus Hurma will stop the player and state that "one explosion a week is enough. I'm still fishing bits of petrified wizard from my tea." The chatbox: "You may complete the statue in another x days."

Strange rocks are automatically kept upon death unless the player is in the Wilderness.

When trying to collect a strange rock by training skills, the player will hear a small "clunk" sound and receive the message " You find a strange rock (skill)." upon receiving one. When training a skill and a rock is received with a full inventory, the player receives the message " Something odd happens to the (name of last object created) and you are left with a strange rock." This effectively replaces the item in the player's inventory, which could be detrimental if it replaces something expensive. If the player has a statue collection bag (see below) in their inventory or equipped; however, the rock will be deposited directly into the bag without the loss of other inventory items.

The player needs two rocks from each skill to complete the statue. When the player has collected two pieces in one skill, they can be added to the statue plinth in order to create a section of the Dahmaroc statue. The plinth is located in the Varrock Museum right next to the entrance.

Players can use a Statue of Dahmaroc list to keep track which rocks they've added to the statue. Players need to have two pieces to be able to add to the plinth.

Once a player completes the statue for the first time a player receives a replica plinth from Barnabus Hurma to put in the study in the player's POH (this is where players will be building their very own statue). Each time the player completes the Museum's statue they will receive an additional replica piece of statue to use for building the statue in their POH. The player can then begin to search and collect pieces again, which gives the ability to receive the extra experience once again. Because a player may only complete the Museum statue once per week, completion of the statue in their POH takes a minimum of 30 weeks, one for each statue piece received.

If the player completes the statue in their POH and continues to turn in their strange rocks, they will not receive another plinth, even if they have a second study room built. The player will, however, continue to receive the bonus experience for all strange rocks turned in.

Rocks can be obtained through most normal skilling methods in any given skill, including skilling in a clan citadel, using portable skilling stations, and adding runes to no-rune-attached urns of the corresponding skill. The table below lists various methods for obtaining the rocks, as well as some specific exclusions (activities which do not yield rocks).

In general, skills give a chance at obtaining a strange rock per action, regardless of the material being gathered or worked, or if the material is gathered. For example, in gathering skills such as Fishing, trouts, rocktails and failed attempts have the same chance of giving rocks. 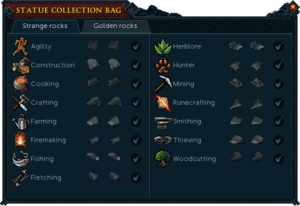 No special equipment is required to collect strange rocks; however the player can talk to Barnabus Hurma (or any of the other archaeologists) within Varrock Museum to receive a statue collection bag. When the bag is carried in the inventory or equipped in the pocket slot, it will automatically store any statue pieces a player gains from a skill activity (giving the message " You find a strange rock and add it to your bag."), and can be filled with your library of rocks.

When a player has two corresponding statue pieces in your bag, they may simply empty the bag and use the rocks on the statue base, or continue to collect further rocks until the bag is full - or anything in-between. The experience will be given at any time, until the last rock pair is ready, which can only be done once per week (see elsewhere this article). Thus, if a player needs that experience immediately to level, it can be received immediately. The player may also 'Look-in' the bag to check how many rocks have currently been collected.

If the player loses or drops the statue collection bag, the contents will also be lost, requiring the player to complete skill tasks to regain the rocks that were lost.