A player being affected by a strange power.

Strange powers are events triggered by the death of a Dream of Mah, which causes all of their power to dissipate from their bodies. This energy causes other nearby beings, such as humans, to be engulfed by red mist and to briefly levitate as they feel the effects of it. During Mahjarrat Rituals of Rejuvenation, the energy of the Mahjarrat sacrificed to the Ritual marker is channelled through it onto the other Mahjarrat nearby.[1] 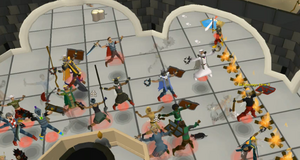 Players at the Grand Exchange first experience the Strange Power.

A strange power caused by the death of the last Chelon-Mah, sacrificed by Bilrach in Daemonheim, occurred at about 19:48 UTC on 23 January 2010. This power was felt all over Gielinor, and was felt by all the players online at the time, in addition to affecting seers. The effects lasted for about seven seconds, and when the players stopped floating, they all faced northeast, towards the future location of Daemonheim. All the players who experienced it received a message saying, "You feel a strange power unleash itself upon you."

After the event occurred, the RuneScape Forums were flooded with threads in relation of the event, asking what happened and speculating as to the cause of it. In one thread, a Jagex Moderator refused to provide any hints on the nature of the event.[2] On the Jagex Twitter channel, a Jagex Moderator posted a hint saying that all will be revealed in time.[3] On the same day, Mod MMH posted an anagram on the official forums for players to solve. The anagram was Acolyte Until.[2] He also said that the answer was four words long and began with an I. Players quickly discovered that the anagram unscrambled to I can't tell you.

On 22 February, 30 days after the power occurred, Daemonheim was added to RuneScape, but was inaccessible. Hilda, one of two Fremennik guards at the entrance, said that the Fremennik had come to the castle, and were currently raiding the dungeons beneath in search of the power. On 12 April, Daemonheim finally became accessible.

Jagex later officially stated that the strange power was a teaser for the Dungeoneering skill, stating, "The strange power that knocked players to their feet in early 2010 came from Daemonheim, or so the Fremennik believe. Their seers traced the source of the power to come from this point in the Wilderness, and they gathered dozens of warriors to explore Daemonheim's depths. Not everyone has come back, however.".

After the initial event, all sorts of speculation and rumours had spread. Among hundreds, only a few were confirmed to be true, which are the following:

Dialogue was added to the following NPC's in relation to the power:

During Dishonour among Thieves, Bilrach finally reveals what caused this strange power. According to Bilrach, it was caused by himself sacrificing the last remaining Chelon-Mah (which he had captured and brought to Gielinor from Freneskae) to a ritual marker (also from Freneskae) at the bottom of Daemonheim. The Chelon-Mah in question had sacrificed the rest of the Chelon-Mah tribe and grown extremely powerful as a result (although by the time Bilrach captured it, it was relatively weak), which coupled with the fact that only one Mahjarrat was present to receive the sacrificed energy, is likely why this strange power was felt worldwide, as opposed to most other known examples (such as Jhallan's death). 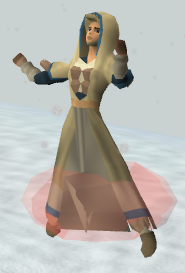 During Ritual of the Mahjarrat, when Lucien sacrifices Jhallan as part of the Ritual of Rejuvenation, the player, Sir Tiffy, Idria and Akrisae experience a strange power, causing the message "You feel a strange power unleash itself upon you as the Mahjarrat dies." to appear in your chatbox. Likewise, another strange power occurs as a result of Lucien's death at the hands of the Dragonkin, once again affecting the player, Tiffy and Akrisae, and causing Sir Tiffy to remark "Well, that was odd."

After the quest, Wahisietel may be spoken to for dialogue relating to the power, where he explains that it is caused by Mahjarrat dying, and that is channelled through the Ritual marker during Rituals of Rejuvenation.