From the RuneScape Wiki, the wiki for all things RuneScape
Jump to navigation Jump to search
Item JSON: {"edible":"no","disassembly":"no","stackable":"no","stacksinbank":"yes","death":"alwaysinclwild","name":"Strange chest","bankable":"yes","gemw":false,"equipable":"no","members":"yes","id":"27406","release_date":"18 February 2013","restriction":"quest","release_update_post":"Try the RuneScape Bestiary","lendable":"no","destroy":"You can get this back by returning to the tree stump south of Rellekka.","highalch":false,"weight":1,"lowalch":false,"tradeable":"no","examine":"Locked, but no keyhole.","noteable":"no"}

The chest is locked and appears to have no keyhole or other way to open it. On returning to Koschei the deathless, he will immediately know that you have found a chest, before you have a chance to tell him about it. He says that this is because he feels some connection with the chest. He will unlock it, revealing a toy ship inside. 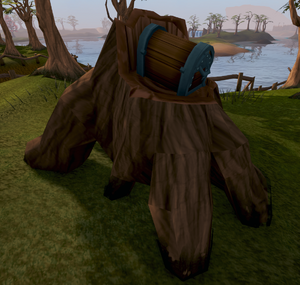 The chest, found inside the blossoming tree's stump

This information has been compiled as part of the update history project. Some updates may not be included - see here for how to help out!
Retrieved from ‘https://runescape.wiki/w/Strange_chest?oldid=35846922’
Categories:
Hidden category: