From the RuneScape Wiki, the wiki for all things RuneScape
Jump to: navigation, search
The Old School RuneScape Wiki also has an article on: osrsw:Strange box
Not to be confused with Mystery box.
Strange box? (edit)

A Strange Box when opened.

The strange box is a discontinued item that was given to players by the Mysterious Old Man. When opened, it presented the player with a puzzle; they had to pick which shape held which number, or vice versa, on a spinning box. Upon completing the puzzle the player received coins, gems (sapphire, emerald, ruby, or diamond) or a half key.

Ignoring the strange box resulted in spawning of even more strange boxes. The strange box only stacked when there were no available spaces for it to spawn another box into. Casting high or low alchemy on the box, dropping it, or banking it also caused another box to spawn.

If the player received the strange box when they had a full inventory, the old man instead teleported them to a maze.

Effective on the 25 February 2009 update, all player-owned mystery boxes were automatically converted to Random event gifts and the Mysterious Old Man stopped giving them to players, which made the boxes a discontinued item. 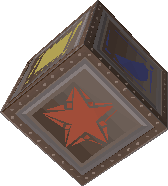 Strange Box prior to the colour blind update.