From the RuneScape Wiki, the wiki for all things RuneScape
Jump to: navigation, search
Stone fish? (edit)

Stone fish is an item used in the quest Druidic Ritual. It is caught using a fishing rod and a coin on Sparkling fishing spot near Taverley and scaled. Catching it yields no experience. Players can only have one at the time. Using a chisel on a stone fish results into receiving stone scales. Scales can be gathered multiple times, but only one can be held in inventory. They are about to be delivered to Sanfew so that he can make an Ointment of imbalance to call Guthix's attention to Burthorpe's troll problem. 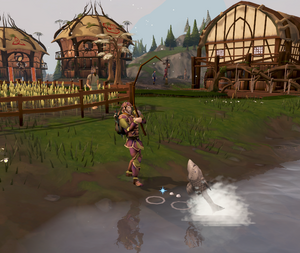