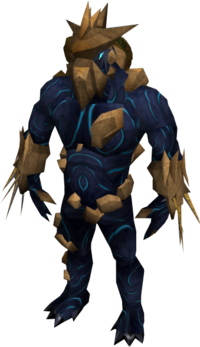 Stone clones are one of Vorago's minions that he summons to fight on the penultimate phase. He creates them by cloning players fighting him, and as such they gain their stats.

These clones appear only during phase four and right after Vorago's waterfall attack. The number of clones that appear are scaled with the amount of players in the arena; one clone will always spawn plus an additional clone for every 7 players. Stone clones copy the name of the player that they target; for example, if a player's name is Player22145, the Stone clone's name will be Stone Player22145. Stone clones will not be created for the player who has Vorago's focus at the time. As such, the bomb tank can use provoke on Vorago to prevent them from spawning one, or kill it with devotion active to extend the effect.

They use the same combat style of the weapon their target is wielding upon creation. They will also use respective abilities from that type of weapon, and can also use defensive abilities. The clone's weakness depends on the attack style it uses; melee clones are weak to fire spells, ranged clones to slashing weapons, and magic clones to arrows. When a ranged/magic using clone is spawned into the arena, they begin the fight by using a bleed. Melee clones begin the fight by using a stun instead.