From the RuneScape Wiki, the wiki for all things RuneScape
< Stealing Creation
Jump to: navigation, search 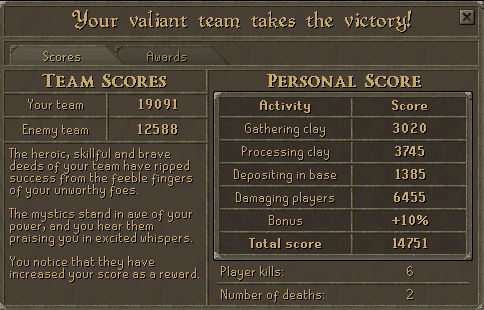 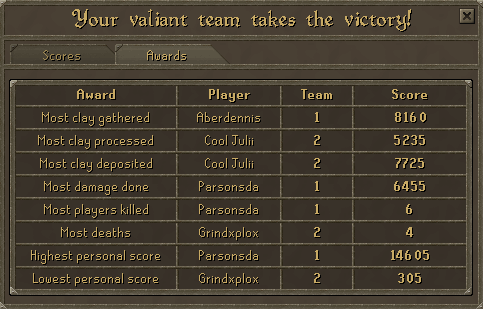 Doing various activities in the minigame will either earn or deduct from a player's personal score.

Only combat experience is gained through the stealing creation minigame if you kill an opponent. Experience is not gained by other means. However, double experience tools, armour and weapons can all be acquired from the Rewards Mystic after a game.

There is a Rewards shop in the hut east from the portal the players appear from when the game is over. Rewards are received in exchange for points gathered from playing the minigame. To exchange points, players may talk to the Rewards mystic and he will show them the variety of different rewards.

The score you gain while playing Stealing Creation is converted into reward points according to the following scheme: 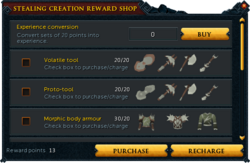 The reward shop sells bonus experience in many combat and non-combat skills. Bonus experience can be consumed from sacred clay tools, armour, and weapons, or bought directly in bulk.

Tools bought can serve in place of ordinary ones, should they not be on a player's tool belt. The armour sets and weapons are tier 50, and the shields are tier 65.

So long as its experience has not been claimed, proto-tools can be reverted to seed and remorphed any number of times, should you change your mind on which tool you want. Volatile tools can be remorphed as well, but the tool loses 10% of its original experience with each morph and will be destroyed on the tenth revert.

Morphic armour for the head, body, and legs can be bought, as well as a weapon, each containing as much bonus experience as proto-tools. The individual prices range from 24 to 30 reward points. An item's bonus experience can be consumed immediately, leaving it still usable for combat; all depleted gear can be replenished in bonus experience for 20 points. If the player does not need the combat gear, then buying in bulk is the cheaper and simpler option.

Attack, Defence, Magic, Ranged, and Strength are all candidates for bonus experience. Bonus experience in Defence is only obtained from melee equipment.

Each item has a right-click option to change its combat style, and doing so will change any other items equipped or in the inventory to match, on the conditions that the items were drained of experience and were the same style to begin with. If you attempt to change an item that still has its experience, then you will receive bonus experience for the new combat style, draining the item. There is no limit to the amount of times depleted gear can be morphed.

The equipment is tier 50 and as such, level 50 in relevant combat skills are required to use it.

A morphic shield is bought for 200 reward points, which can be changed between magic, melee, and ranged combat styles at no cost. The shield is tier 65, higher than the other combat equipment at the shop, and it behaves as an ordinary shield. It degrades in combat and can be recharged for another 200 points. All styles require 65 Defence to equip. No bonus experience comes with its purchase.

A piece of each outfit is bought for 100 reward points each. You will receive a random piece of equipment, but you will not receive any duplicates.

The update history project is a work-in-progress – not all updates to this topic may be covered below. See here for how to help out!
Retrieved from ‘https://runescape.wiki/w/Stealing_Creation/Rewards?oldid=35457702’
Category:
Hidden categories: