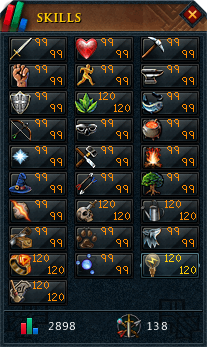 The Stats tab, also known as the Statistics tab, is a panel which can opened in the upper-left corner of the control panel interface. It displays all of the skill levels of a player.

Additionally, if the mouse is hovered over a skill, the current experience in that particular skill is displayed, the experience needed for the next level is shown and the target level and progress bar is shown. If the link is clicked, the interface displays a menu which provides the milestones which can be achieved in that skill.

After level 99, players can toggle the ability to show "virtual levels", which counts achievements past 99 up to 125 for non-Dungeoneering skills. They can also toggle to display a symbol next to the skills icon, with gold being level 120, and blue being 200 million experience. 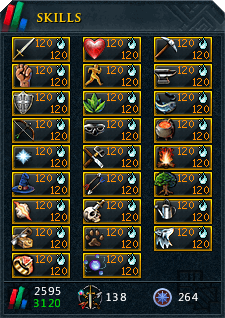 On 20 October 2009, Jagex updated the interface so that while in resizeable window mode, players are able to see all of their skills without the need for a scroll bar.

On 5 October 2015, Jagex updated the interface to optionally keep track of levels past 99 for all skills. They also added a gold trim for skills past 99.