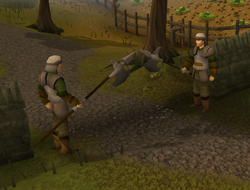 The guards at Draynor Village. 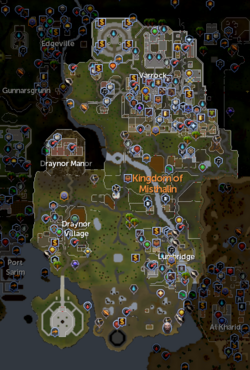 It was added 17 September 2009, with the Advisors and Objectives update.[1] The purpose of this feature was to help new players and prevent them from entering dangerous areas such as Gunnarsgrunn, where barbarians that range from levels 10 to 29, will attack if talked to.

It is possible to leave or enter the starting area without going past the border guards through many methods of teleporation and transportation, such as canoeing from the Gunnarsgrunn to Edgeville, as well as with two agility shortcuts. Most of these would require having a total level higher than 60, however.

When the starting area was created, items outside the area that were critical to play were moved inside or new items created. In addition, some new features around Misthalin were added. These are as follows:

Some shops within the starting area give out free items. They give out items that are very useful for beginners, such as a bronze sword from the Varrock Swordshop to start off.

Draynor Manor is part of the starting zone, however lower level players may easily die here due to Undead trees, vines, etc. It is dark in that area, and creatures could sneak up on lower levelled players, maybe killing them. Also, once entering the mansion through the main entrance, you cannot get out by that same entrance. You must find the smaller one that is to the north-east.