From the RuneScape Wiki, the wiki for all things RuneScape
Jump to: navigation, search
Not to be confused with Standing stones.
Standing Stones? (edit) 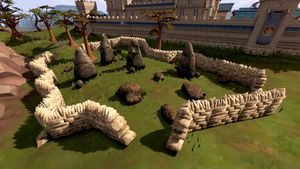 The Standing Stones are mysterious stones found north of Falador. Players occasionally need to dig near them for a clue scroll, and it is also where the Balance Elemental engram is found during Memorial to Guthix.

At RuneFest 2010 it was revealed that they were added because the graphics designer was told to make some existing stones look "interesting". On a later date Mod Osborne said that they had a use: "Paul G had a very definite idea for what they represent/represented. I think you might found[sic] out more in the coming months."[1]

It was eventually revealed that the Standing Stones mark the location where Guthix created the Balance Elemental.[2]

During the God Wars, the pyrelord Pazuzu, who was in charge of an army of gargoyles, was investigating the standing stones. The troops of Saradomin however scared him away before he could find what he was looking for. During this period, the area appeared to have a snowy climate, unlike the climate it has now.