Staircases are found in buildings or houses with two or more stories. They may also be found leading downwards into dungeons. A staircase may simply be a row of steps, or it may be in the more ornate form of a spiral staircase. All staircases are climbed at the same speed (as they have no animation for climbing them) so the size differences are purely aesthetic.

When a player right-clicks a staircase they will usually be given three options based on whether they lead up as well as down: 'Climb', 'Climb-up' and 'Climb-down.' If a player chooses the climb-up or climb-down option their character will do just that, either progressing to the next floor or digressing to the floor below. If a player selects the 'Climb' option, or merely left-clicks the staircase, a message will appear. The message will ask the player to choose whether they wish to climb up or down the staircase. In the Columbarium, instead of saying "You walk up/down the stairs", it says "You tramp up/down the stairs."

New players may find that the first staircases they use are those in Lumbridge Castle, in the north-west and south-west corners. They are used to access the upper stories of the castle, including the bank there. In Tutorial Island, when it returned after the new Lumbridge Tutorial was removed, a glitch occurred where most stairs could not be used, along with many other changes.

Staircases bring characters up or down a level. Most of the time, you can see all or most levels using a Graphic Setting.

The stairs at the Heroes' Guild. 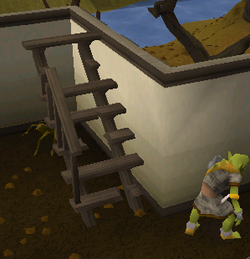 There used to be a set of broken stairs in Lumbridge. They have since been fixed! 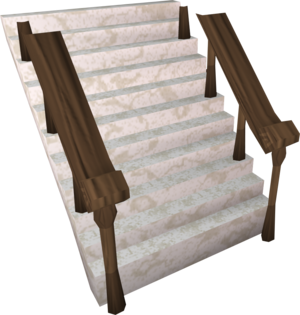 Members may build a marble staircase in certain rooms of their houses.

These types of staircases can be built depending on your level in construction.

The update history project is a work-in-progress – not all updates to this topic may be covered below. See here for how to help out!
Retrieved from ‘https://runescape.wiki/w/Staircase?oldid=35463091’
Categories:
Hidden categories: