From the RuneScape Wiki, the wiki for all things RuneScape
Jump to: navigation, search
Stack of books? (edit) 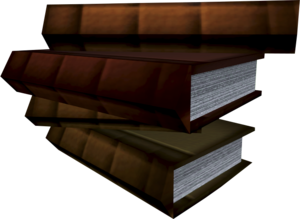 A stack of books, titled Tavia's Fishing Notes, is interactive scenery that can be read on Tavia's island. Players will find Tavia's fishing rod nearby to claim. The island, and thus the book, can only be accessed by the use of a red uncharted isles map. It tells the tale of Tavia attempting to catch Arkaneo.

The following text is transcluded from Transcript:Tavia's Fishing Notes.

I was just a pup when my father first told me about the beast of the great seas, the beast that eluded him until his death. He used to tell stories of the elusive Arkaneo to lull me to sleep. A magnificent animal, the most beautiful sailfish he had ever seen. It has been two years since he left us and I still dream about his stories. I haven't stopped searching. I won't rest until I finally catch her. I will make my father proud.

Today was another unsuccessful voyage. I am beginning to believe she is but a ghost, forever just beyond my reach. She teases me from the distance, jumping from the water with her glorious fin glinting perfectly in the rising sun. A beautiful dream that I am sure I will run crazy trying to capture.

I have a plan. Tomorrow will be the day. I shall be upon Arkaneo before she knows it and I shall finally be able to rest as I grasp her. Finally. It will be over.

It was nearly done! I tempted her so close! This is closer than any angler has come before. I shall be known the world over for this! I have a prize. She gave me something to reward my efforts. Her beautiful fin is mine. I managed to attach myself to it and she left it behind, just for me. I may be able to sleep a little easier tonight.

It seemed a waste to leave her fin hidden inside my house, gathering dust. Something like this should be seen by the world! I shall show everyone what I am capable of, what I have achieved. Something that even my father couldn't. I have crafted a fishing rod, attaching the fin at its hilt. It might be even more beautiful than the beast herself.

The update history project is a work-in-progress – not all updates to this topic may be covered below. See here for how to help out!
Retrieved from ‘https://runescape.wiki/w/Stack_of_books?oldid=31449871’
Categories:
Hidden categories: