From the RuneScape Wiki, the wiki for all things RuneScape
Jump to navigation Jump to search
Item JSON: {"edible":"no","disassembly":"no","stackable":"no","stacksinbank":"yes","death":"always","name":"Sprinkler MK1","bankable":"yes","gemw":false,"equipable":"no","members":"yes","id":"37399","release_date":"16 May 2016","release_update_post":"Invention Tech Trees Update - New Devices - Griffon Outfit","lendable":"no","destroy":"You must manufacture another one at an Invention workbench.","highalch":false,"weight":5,"lowalch":false,"tradeable":"no","examine":"Plant this device in a flower patch to keep your allotments watered.","noteable":"no"}

The sprinkler MK1 is a persistent Invention device in the Dwarven technology tree that can be placed in a flower patch to keep the adjacent allotment patches watered. To unlock a blueprint in a tier, at least one blueprint in the previous tier must be unlocked (though it doesn't have to be researched).

As watering a patch makes it slightly resistant to disease for the next growth tick, it works a little like a white lily. The watering occurs whenever a plant advances a growth stage, so it could be possible for the plant to become diseased right after planting. As the sprinkler only reduces the risk of disease a small amount, rather than eliminating the risk of disease, it is still possible for plants to die while one is planted. The sprinkler has the advantage of not requiring any time to grow before it becomes functional. It can also be removed from the flower patch by using a spade on it, returning it to inventory to be reused. A spade held in the player's tool belt will not work.

Discovering this device requires the player to have the blueprint unlocked from the dwarven technology tree, and level 50 Invention. Success in creating the blueprints earns 18,257 Invention experience. 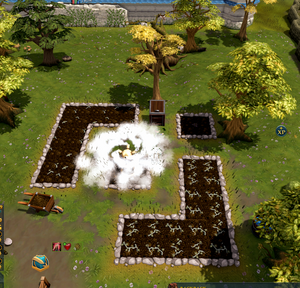