Spiritual Enlightenment (miniquest) is a part of the Tales of the Arc miniquest series.

To begin, speak to The Assassin (Ling) on the island of Aminishi. She asks for help finding the monk, Yulong but keeps her reasons secret. Ling suggests fighting the Acolytes of Seiryu on the northern portion of Aminishi to obtain clues.

The path of enlightenment[edit | edit source]

Killing any monks of Aminishi will allow you to receive the three books. The books are The Path of the Monk, The Path of the Elemental, and The Path of the Dragon. They may be received before completing this quest; you can check your Slayer collection log to see if you have previously obtained any of them. Be sure to read the books immediately after getting them, because the next one does not seem to drop before you read the previous one. The books have a 1/16, 1/32, and 1/64 chance of being dropped, respectively. Be sure to save at least a few of the spirit dragon charms you obtain, as you will need them later. Make sure the charming imp is not set to destroy spirit dragon charms. 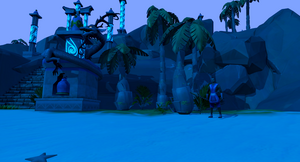 Yulong in the Spirit Realm.

Once all three books have been obtained and read, return to the southern shore and speak to Ling. You must speak to Ling before you can interact with Yulong. Then with a few Spirit dragon charms in your inventory, head to the centre of the island, near the Sakadagami. Interact with the dragon statue (well of spirits) to be sent to the Spirit Realm. A Spirit dragon charm is consumed per minute spent in the Spirit Realm. You will only need one charm to reach Yulong. Run to the southern shore of the island (where Ling stood before) and speak to Yulong. Charms aren't consumed while you're talking to him. You must decide to either tell Ling where he is or agree to keep him hidden.

Once you finish speaking to Yulong, return to the statue and exit the Spirit Realm. Run back to the beach and speak to Ling. Depending on your earlier choice, you will either reveal Yulong's location or keep it a secret. Ling will reveal some new information about Yulong. Finish your conversation with Ling to complete the miniquest. 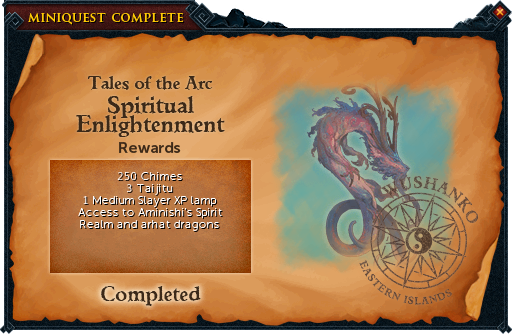 Spiritual Enlightenment (miniquest) is directly required for the following quests/miniquests: