Spirits of the Elid is a quest in which you must assist the villagers of Nardah in restoring water to their town, which has all but disappeared. The villagers believe themselves to be the victim of a curse, and you must discover the truth of what has happened to the village's water sources.

The people in the desert village of Nardah have a problem. Their town well has dried up and any water they try to get from the river mysteriously disappears before they can get it back to town.

The villagers suspect they have been cursed in some way. Can you unravel what is going on and save the village?

To start this quest, head to Nardah and speak to Awusah the Mayor, located in the house directly east of the fountain. He will tell you that there is a curse on the town, and there is no more water available to the people anymore. Go to the house just north of the mayor's house and speak to Ghaslor the Elder. He will give you a ballad.

The ballad sings about a man's journey to the source of water for Nardah - quite similar to your quest. It also tells you about an ancestral key used by his priestess to open a great stone door, through which appear "Three great men all hewn of rock, three small chambers they did block". His comrades were murdered by the "rock men", but he managed to retreat after successfully slaying one of them.

Go to the shrine, just north of the dried up fountain and west of Ghaslor the Elder's house. Take the ancestral key from the enclosed area on the east side of the museum using telekinetic grab and search the northwest cupboard to find some torn robes; there's a robe top and bottom, so get both. Left-click on the robes to repair and turn them into the Robe of Elidinis top and Robe of Elidinis bottom. Speak with Shiratti the Custodian to learn about what the key can do. You may attach the ancestral key to your steel key ring if you've completed the One Small Favour quest.

If you need it, make sure to have food and/or prayer potions for fighting the golems. You have to bring at least three weapons, each representing a different melee attack style (crush - mace, club; slash - scimitar, whip; stab - sword, spear). Ensure that you do not forget your rope. 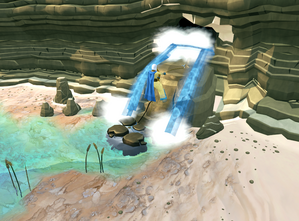 When you reach the entrance to the Water Ravine Dungeon, click on the waterfall to climb it. Once inside the dungeon, you will find yourself before a locked door. While wearing the robes of elidinis, unlock the door with the ancestral key. If you have both the robes and the key and the door still won't open, go back to Nardah and talk to Ghaslor the Elder.

Once you're inside, you'll see three doors to the east. They are each guarded by a level 77 golem that is weak against a certain attack type and almost immune to all others. You need to defeat them, then solve the puzzle behind the door to clear the water channels. 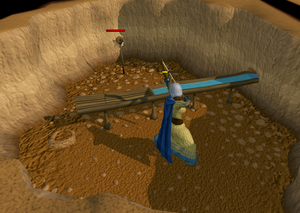 Clearing one of the water channels.

After you clear all 3 channels, the northern door will open. Go through this door, walk around the lake, and talk to one of the spirits, Nirrie, Tirrie or Hallak. They will speak as if their minds are one, telling you to recover the sacred statue of Elidinis and return it to the shrine in Nardah to break the curse.

Due to a bug, when exiting the cave it is possible to get stuck. If this happens, use your home teleport spell to get on track again.

Head back to Nardah and talk to the mayor once again. He will tell you that they threw the statue down a crevice west of town.

Before leaving, take the mayor's shoes beside the entrance door of his house and use a knife on them to create two "soles." Note that you must step outside the house to do this; if you try to cut them inside, he will see you and tell you to leave his shoes alone.

Go west from the general store in Nardah until you come to the large crevice. You need a light source to enter it, or else you will be eaten alive by tiny bugs. Go through the crevice and you'll enter a cave full of snakes with a door to the north. Walk through the door and talk to the Genie, who tells you to get the mayor's "sole" in exchange for the statue; pass one of the shoe soles to the Genie in exchange for the statue.

Finally, use the statue of Elidinis on the statue plinth in the shrine to Elidinis, in the building just north of the city's fountain, to finish the quest. 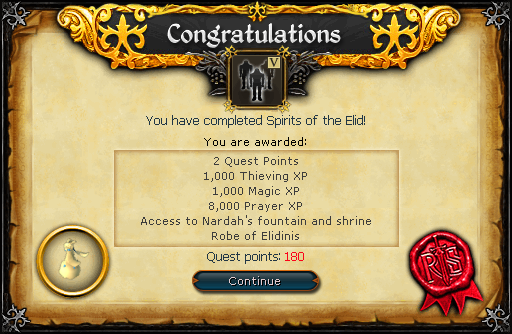 Spirits of the Elid is directly required for the following quests/miniquests: