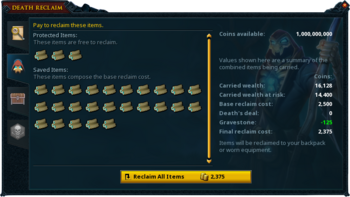 Spawning of players in RuneScape occurs when a player first logs in. Logging on is not spawning as the player remains in the same place as where they logged out.

Some players will lie in wait around spawn points to kill NPCs as they spawn, a common practice known as spawn camping. Spawn points for in-game objects are often used in a similar fashion. Similarly, the word respawn can be used to describe an item or NPC that reappears in the same area after it has been picked up or killed (respectively).

The speed of items spawning on the ground varies with the number of players currently in the world; the more people playing on a world, the faster the items spawn. A player wishing to obtain multiple items from a spawn point might want to pick a world with as close as possible to 1500 players in order to get the items faster, as long as no other players are competing for the same item. This scaling of spawn times according to the player count used to affect many other resources like monsters, rocks, and trees too, but it was changed on 13 March 2017 to use fixed rates that these objects would have had before the change with a half-full world.

Various items in the game also have set spawn points where they appear after being picked up by a player. For example, chaos runes spawn in the Wilderness where moss giants also reside, and bones respawn in the graveyard by Clan Wars.

A Respawn point is the place where a player that has been killed or has had their ring of life activated reappears.

Player respawning occurs after a player dies. If they die without carrying anything that might be lost on death (generally, low level items and certain special items are always saved on a non-Wilderness death, plus 3 most valuable items are by default safe for free), they instantly respawn at the last "hub" they visited, usually a city like Falador.

If they are carrying items that must be paid for to save, they are sent to Death's office where they choose what items to save and/or pay for. Regardless of their choice, they may then exit Death's office via hourglass, at which point they are given the choice to spawn (by default):

However, this choice can't be made when dying in the Wilderness and the player will respawn immediately in Edgeville, lose all items if skulled or keep the three to five (if sign of item protection is used along with protect item prayer or curse) most valuable items they have in their inventory and are wearing.

Players in safe minigames such as the Duel Arena typically do not respawn in one of the regular spawn points, but in a location specific for the minigame they are playing. Dying in unsafe or dangerous minigames usually have normal respawn mechanisms.

You will be able to respawn here making it the default spawn point.

Lumbridge is one of the portals of this realm that are most easily accessed. When your deity of choice spares your life and intercepts your passing to a different plane, it's usually just easiest to attach you to one of the many teleport spells that carry passengers from Tutorial Island to Lumbridge castle, rather than starting again from scratch with a fresh spell of our own. Believe it or not, there's a fair bit of work involved being RuneScape's resident deity of destruction, and I don't have the time to invest in letting careless PKers carry on where they left off. Besides, the walk of shame from Lumbridge back to Varrock teaches them a lesson about being more cunning in future.

Players can always choose to respawn in Falador once they have completed the Recruitment Drive quest. In game this is referred to as the Gaze of Saradomin.

After completion of the King's Ransom quest and completion of Knight Waves Training Grounds miniquest, players will always be able to choose to respawn in Camelot.

When doing Blood Runs Deep, players will respawn in the Fremennik spiritual realm (the Fremenniks' heaven) in certain points during the quest, such as when fighting the Dagannoth Mother. After the quest, however, players can no longer respawn here.

In Daemonheim, players who die will respawn in the starting room, and the player's death count will increase by one. Deaths negatively affect experience earned for the dungeon, and can give up to a -80% penalty.

Hubs are recently visited cities where the player can choose to respawn at. Some hubs are members only, or require the completion of various quests to access. The current available hubs are: