From the RuneScape Wiki, the wiki for all things RuneScape
Jump to: navigation, search
This article is about the NPC. For the pet, see Sparky.

Sparky is a squirrel in The Poison Arrow pub under the care of Geoff. He can be understood with level 70 Summoning. Sparky's leg was injured when Geoff shot him with an arrow in an attempt to get in the Ranging Guild, who gave him a specially crafted arrow to act as a crutch. He wears a miniature Robin Hood hat which he claims he got from a place "Two-hundred paces north and five-hundred paces east", the Grand Exchange in Varrock. Sparky occasionally dodges one of Geoff's stray arrows.

He disappears from the bar once his pet form is obtained.

He is an answer in the RuneScape Quiz #5, specifically the seventh question: "Who, or what, is "Sparky"?" 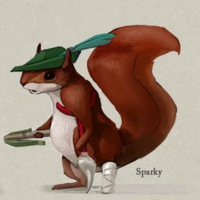