Spa or Spa facilities are a reward of the As a First Resort quest. There are 5 pools located in the Ogre city of Oo'glog. Players can bathe in all pools, and possess all effects from the pools at once. Players can also use an ogre flask, craftable at level 89 Crafting or available as a reward from the Slayer Bounty & Deathmatch Reward Shop, to bottle a pool's effect for later use.

To enter or leave a pool, left-click the edge of the pool where it says "Climb-over Rocks".

The fastest way to get there is to teleport to the Oo'glog lodestone, or teleport to South Feldip Hills by using the level 10 teleport spell, the spirit tree, or the ring of duelling and then running east. Alternative methods are also available, including using the Ectophial teleport (or Catherby Teleport) and then chartering a boat from Port Phasmatys (or Catherby), and running from the Feldip Hills fairy ring (AKS) to the agility shortcut. Players with 57 Summoning can use the Spirit larupia teleport to land the player a short distance north of Oo'glog in the Chinchompa hunting ground. 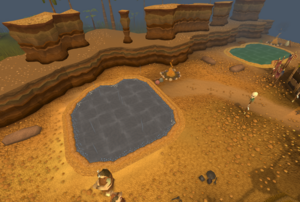 The thermal and salt-water springs