From the RuneScape Wiki, the wiki for all things RuneScape
Jump to: navigation, search
Soul cape (white)? (edit)

The Soul cape (white) is an item received from defeating the Memory of Nomad in under 14 minutes. It can be obtained on a reward run and on a non-reward run. It is not received if the mahjarrat aura or any deathtouched darts are used during the fight.

If the cape is lost on death or destroyed, you must defeat Nomad again in order to reclaim it. 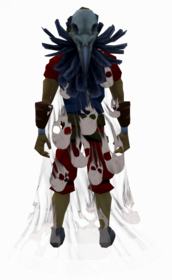 The soul cape comes in various different colours, which can be obtained by killing Nomad within a certain amount of time: