From the RuneScape Wiki, the wiki for all things RuneScape
< Soul Wars
Jump to: navigation, search

How to contribute within a game[edit | edit source]

There are various ways you can help your team win and increase your activity bar. Below are all possible ways.

Note: Not all of these actions grant activity for the activity bar. 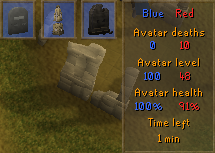 A typical score for the end of a Soul Wars game.

Whichever team defeats their opponents' avatar the greatest number of times in the time limit will be declared the victor. If both teams have the same number of kills, it is declared a draw.

The most effective strategy to win the game is to simply take control of the graveyards. The opposing team will thus only be able to bury bones in their own base in order to increase the avatars level. This is also effective because the other team will have to run more to re-join the battle upon death, making it harder to keep control of a given area.

A good way to buy some time for your team to take control is by taking a barricade and placing it in front of the other team's entrance to the obelisk. The other team will also probably know about this, so it's best to bring a few explosives with you. However, putting up a barricade there will probably result in many people attacking it, so it will not last very long.

Lately, the winning team is decided during the first 2 minutes by the first team that takes control of their graveyard, due to the fact that many people decide to rush the obelisk instead of claiming their graveyard, therefore making the graveyard control slower. While the other team is wise and immediately take their graveyard then rush the other teams graveyard and taking it over, doing this causes a great impact at the rate foolish team's players arrive at the obelisk therefore causing the loss of the obelisk, after that it is better to leave the game unless you want the 1 zeal you get for losing.

A popular strategy that people are starting to use is to use ice spells in front of the opposing side's bridge to the obelisk to slow the amount of people reaching the obelisk with full health. This weakens massive amounts of players before they even reach the obelisk to be finished off by other players at the obelisk.

Another commonly used strategy is to head over to the enemy graveyard and use the multitarget ice spells from the Ancient Magicks spellbook to damage and freeze large numbers of players simultaneously for large amounts of damage and experience. This is only practical, however, if your defence and technique are good enough to withstand a constant pile of more than 20 people using both melee and ranged (you will often be the primary target of those who have just respawned, especially higher-levelled players). Mages choosing to do this should also be extremely cautious of the Godsword special attacks, Bandos' special attack in particular.

A slightly harder strategy is to use blood spells at the graveyard, which could, if flashing Soul Split, make a mage last an entire game without dying. The difficulty lies in the fact that, unless ice spells are used in conjunction with the blood spells, the targets will be able to escape and/or follow you (thus poisoning or killing you). If you have extremely quick reaction and are confident in your ability to flash prayer and also have an exceptional internet connection, you could use the Staff of Light special attack, flash Soul Split whilst switching constantly between ice and blood spells and heal with bandages. This is only recommended if you use hotkeys (F1, F2, F3 and F5) and have Quick Prayer set to Soul Split.

Even so, the best of mages with near-perfect technique can and probably will be killed by rangers. Keep in mind that Ahrim's robes have 0 defence against ranged, and Void robes only have a +45 defence, meaning that even a small group of rangers can take down a high-level mage quite quickly. There are only a few ways to overcome the limitations of the combat triangle - hybriding is by far one of the easiest methods. Simply take equipment from all sides of the combat triangle (a Helm of Neitiznot is very useful as it has no penalties against any style of combat) and switch as necessary. However, remember that there is a high chance that there will be other hybrids present, some of who will not be on your team.

Some players attempt Graveyard or Obelisk '"rushes" to take control of the opposing team's grave or the soul obelisk. Most of the grave rushes on a crowded world fail, since the opposing players still in the sanctuary zone will spill out once they lost control of it and will quickly retake it. If they are successful, the other team is crippled for the rest of the game, since they aren't able to get people quickly in the front lines. Successful obelisk rushes will lose the enemy's control of the obelisk and the bar will slowly change colour and the rush's team takes control. A somewhat useful weapon for Obelisk rushes is the dragon halberd, due to its special being capable of hitting relatively high on several enemy players at once as they spill out of the bridge to the Obelisk.

To start a "rush", usually a single player spams "grave rush!", "obby rush!", "g rush!", or "fall in for grave/obby rush!", etc. at their graveyard and tries to get as many players to follow them as possible. Those players often spam "fallz", "fall in", "grave rush", etc. and attract more and more players. When there are enough players following one, the rush leader takes everyone to their team's supply area and everyone gets bandages, then follows the leader again as they all run to the area they try to take over. The best thing to do in a rush is to rush the enemies grave yard. Usually if the enemy has both graveyards, the enemy graveyard is usually unguarded.

Along the way most players scream "fall in for grave/obby rush!" or spam @ signs many times to fill the screen. The players in a particularly massive rush may cover the screen with their @ signs, causing a lot of lag. When everyone reaches the grave or obelisk they start to attack the enemies, hopefully killing enough (or having enough people to outnumber the enemy) to make the enemy lose control of the area being rushed.

Defence is often overlooked in Soul Wars with an emphasis on controlling resources in the game through such tactics as rushing. This strategy can be used against the enemy by making them "run the gauntlet" when approaching your team's avatar.

Rangers can be positioned close to the main battlefield as a first line of defence. This starts reducing enemy life points, can poison the enemy, and helps to prevent mages from being attacked due to the need for more bandages.

Mages can then use bind, snare, entangle, or ice magic to prevent further access to the base. Rangers can continue to do damage while the enemy is prohibited from moving. Both mages and rangers have the advantage of attacking over obstacles, which can greatly assist in storeroom rushes.

Melee acts as the last line of defence. Warriors should be positioned between the entrance to the storeroom and in the corridor leading to the team's avatar. Rather than relying on mages and rangers, warriors should make use of barricades to keep their opponent within melee distance. An effective front line of mages and rangers is responsible for slowing and weakening the enemy enough for fast, effective kills.

E.g. A mage may use a melee familiar to target enemies in magic-resistant armour, or a ranger may use a familiar with a magic-based attack on an enemy wearing metal armour.

It is not recommended that you set out to pursue a defensive strategy right from the off, however; doing so runs a very high risk of being kicked for inactivity. You should fall back to defensive measures only when your team's Avatar is under threat, or if for any other reason a large amount of players are infringing on your territory (particularly your team's graveyard).

If a balanced team is having an avatar close to death, pures can attempt to barricade the entrance to the avatar. This blocks unsuspecting players, as they are too 'overconfident' to notice the barriers before they get barraged in time. For the blue team's avatar, they can block the 1x1 entrance and the 3x3 outside. The red team's avatar can do a 3x3 barricade to frustrate players and make them run from the western graveyard to the eastern avatar.

The most important thing players can do to ensure a victory is to choose the correct team from the beginning. In almost all games, the final outcome is decided in the first five minutes. For this reason it is sometimes discouraged to pick your team, and players should go through the teambalance portal.

Once a team of high level players captures the obelisk and both graves, the other team has more or less lost. Players should scan both waiting rooms and select the one with more level 110+ players, as this team almost always wins. Additionally, Summoning familiars may be used as reference points when scanning a waiting area-if a team has many higher-level familiars (e.g. titans) in the waiting area, that team usually ends up winning. Unfortunately by the time you've scanned a team, it will have become very full and you will have likely missed entering the next game. Clan chats can also be used to determine the winning team, as the leader and ranked people make "calls", or a prediction on the next team to win. Most high level clans on a world are "allied" and leaders from each clan share the calls with each other, then share them with the rest of the clan. Lower levelled clans tend to "leech" off of the higher levelled clans by going into the chat just before a call, waiting on the call, and then relaying the call to the leaders, who tell the clan. Just about every single time the team predicted wins. If you don't want to join a clan, for whatever your reason is, another way to know is look for which team has the most clan chat advertisers in it. This mostly tells which team they have predicted to win.

An alternative method is to find "tie worlds" for two zeals per game. On these worlds, players intentionally draw the game by refusing to attack the avatar and placing all barricades in front of it. A tie is not guaranteed, as players may "crash" tie worlds, and kill the enemy avatar to break the tie and get 3 zeal for their team. This often fails, as there are rarely enough crashers to actually kill the avatar.