From the RuneScape Wiki, the wiki for all things RuneScape
< Soul Wars
Jump to navigation Jump to search

Players receive Zeal based on the outcome of the game: one for losing, two for a tie, or three for winning. The only exception is if you join the waiting lobby (box) and the game was already half over; for example, you join the waiting lobby at fourteen minutes until the next game starts (therefore, the current game will last eleven more minutes), then if you get into the game, you will get your Zeal. On the other hand, if you join at six minutes until the next game, and get in, you will receive zero Zeal. Seventy Zeal is awarded for completion of the Grandmaster Quest Nomad's Requiem.

Players may trade these in with Nomad, or Zimberfizz after completion of Nomad's Requiem, or Zimberfizz ashes or Zanik after completion of Nomad's Elegy, for a variety of rewards such as experience, charms, and other items. Players can store a maximum of 50,000 Zeal. This is equivalent to playing and winning over 16,665 games at 23 minutes per game cycle, which is equal to just over 266 days of continuous gameplay. 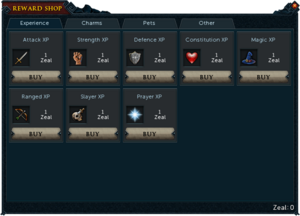 ) is worth a set amount of experience depending on the level (

Note: Useful XP charts are available below, and it will help to have them open when reading this section.

Constitution/Attack/Defence/Strength:
For these skills, one first notices that the experience gained for levels 25 and up occur only as multiples of 525. This suggests that some floor or other integer function is being multiplied by 525. The next thing one has to notice (and this is not so easy) is that the sizes of the level intervals that give the same XP per Zeal is decreasing, and is decreasing just like the derivative of the square root, meaning that, to find the intervals, one can take evenly spaced points on the y-axis of the graph of

involved, and some searching proves that

is the correct answer:

, etc. The function then, for Constitution/Attack/Strength/Defence XP with levels (

).
The 1 is added because all Slayer XP rewards are otherwise exactly 45 too low. The level 1-30 Slayer formula, just by the looks of it, seems to be exponential. So we use an exponential interpolation as follows:
We know that at level 1, the XP per Zeal is 7, and at level 30 it is 135 (keep in mind that the XP per Zeal at level 30 should be the same from both the 1-30 and the 30-99 formula), and we know that the XP function is of the form

Hence we look at

, which will eliminate A from the equation:

Solving for B gives

Now, all that is necessary to solve for A is to use a known value. Let's plug in

But the function we then get is a little off: noticeably, the XP values are low for levels 2, 3, 4, and 5, which can be immediately tested. We therefore add a small correction, by assuming that the experience per Zeal at level 1 is slightly larger (let's say 7.5), and replacing this value for all the 7's in the equation:

And, of course, we take the floor of this function to give the integer XP values. This equation works for all XP per Zeal returns in Slayer for levels 1-30.
The equation itself can be simplified using decimal approximations:

Chart of experience per Zeal per level in any skill:

* Due to the current uncertainty, this calculator may be incorrect. 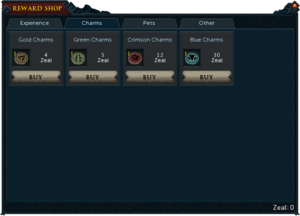 Players can choose to use their points to purchase charms. Gold, Green, Crimson, and Blue charms are available; the number of charms a player receives depends on their Combat skill levels. Charms cannot be obtained if the player has a Combat level of 30 or lower. 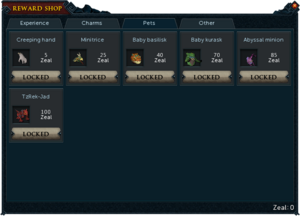 Rewards here include pet versions of various monsters. Players require Zeal along with the remains of a monster which can be received as drops. If players bring a stuffed or unstuffed trophy, Nomad will then supply the player with a pet of that type. 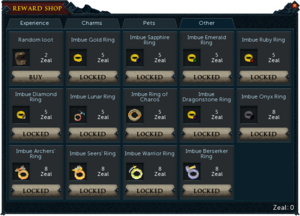 Other rewards include the option to gamble for random items and the ability to imbue certain rings.

Mod Rathe confirming on the RuneScape Forums that rares cannot be obtained from the Random loot, formerly known as "Gamble!", option.

The Random loot option will reward players with a random item. Below is an unconfirmed list of possible rewards from the loot table. The option costs two Zeal. The rewards are related to either the Prayer, Summoning and to a lesser extent Hunter, Herblore and Crafting skills. Due to the fact that the rewards were not listed in any official form at the time of release, there were widespread rumours of players receiving valuable items such as amulets of fury, dragon platebodies, abyssal whips, Elysian spirit shields, and white partyhats, but this has been proven false.

This is a decent way to make money from Zeal, as the least valuable option (desert goat horn) is still worth 2,304 coins. However, it is recommended to spend the Zeal on XP rewards or charms, since you can only get nine Zeal per hour if you win every single game and obtaining a high-priced reward is rare.

The Imbue option allows players to have a selection of rings imbued with power. Imbuing rings increases their damage bonuses by a small amount. To remove the imbue on a ring, players may use it on Zimberfizz or Zanik, depending on quest completion. The Zeal used to initially imbue the ring will not be refunded.

Zeal as a time-saving or money-making method

Assuming the general way of training Prayer is by offering dragon bones at a Gilded altar, the cost of Prayer is 8.82 coins per XP. The Zeal experience of Prayer is pegged to the Zeal experience of Ranged/Magic and Constitution/Defence/Strength/Attack at 1:1.78 and 1:1.94 respectively. Hence the opportunity cost of Ranged/Magic is 4.96 coins per XP and the opportunity cost of Constitution/Defence/Strength/Attack is 4.53 coins per XP. Earning Zeal to spend on experience is a waste, as there are usually much faster ways of getting experience in all of the skills which you can buy experience for. Earning Zeal to spend on the "Gamble!" option is never a good idea as there are much faster money making methods. As for Slayer, you get about a quarter of Prayer's XP, hence the cost is about 35.27 coins per XP.

As for Summoning, it is not worth it as you can only gain about twenty crimson charms or eleven blue charms per hour. This only amounts to approximately 6,000 experience per hour. Harvesting charms can be done with easier and faster methods.

However, if you play Soul Wars for fun and need the charms, it's up to you to weigh the benefits of the charms versus other rewards.