A Soul's Bane is a combat-focused quest revolving around trying to find the lost son of Launa Talvoy, who disappeared in a mysterious rift near the Varrock Dig Site years ago. It may be quite challenging for lower-levelled players.

A rift in the ground has opened up, releasing all manner of strange monsters into the lands near the Dig Site. A sorrowful mother waits at the top of the rift for her long-lost son, who has been missing for 25 years. You can journey down into the rift for an adventure full of twisted monsters, all created from the mind of a young boy driven to madness through incarceration.

Go east of Varrock, just south of the earth altar, speak to Launa. Alternatively, take a glider to the Varrock Dig Site or use a dig site pendant and walk northwest. There is already a rope attached to the rift, click on it and climb down into the rift. There are several "rooms" which players need to get through to complete the quest.

It's worth noting here that this quest does not need to be done all at once - each room has an exit which will take you back to the top of the rift and allow you to enter again at a different time. It will remember the rooms you have completed. 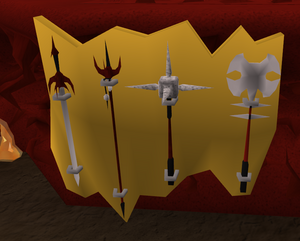 This room represents Tolna's anger and frustrates players because they sometimes have trouble hitting monsters with certain weapons. 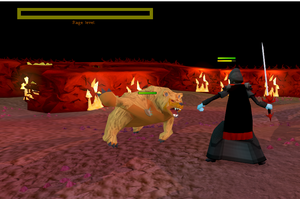 The "rage level" bar increases as the player defeats the monsters.

There are 4 types of monster in this room, and each can only be attacked with a specific weapon. 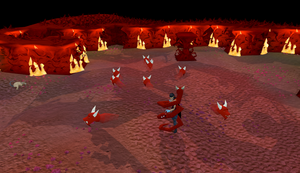 The result of the player's extreme rage

Players can do large amounts of damage on these creatures relative to the stats of the weapon, as the player does 10x of their normal damage with that weapon, with a maximum of 1,250 damage (the monster's total life points).

Each creature killed raises the "rage level" bar at the top of the screen. After several kills of the player's choice of angry creatures, the bar will reach maximum and the player will yell, swirl, and kill all remaining monsters in the room. 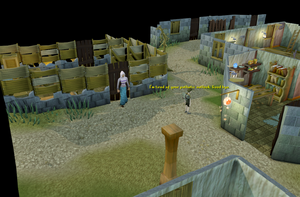 A cut scene in which the boy leaves his mother for the more lucrative mines follows, and players can then exit out of the rage room near the east end of the cave and go into the fear room. 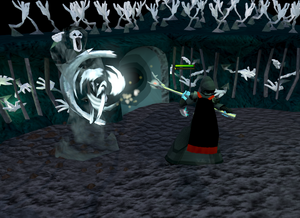 This room represents Tolna's fear by giving players a frightening jolt when they do not know whether a fear reaper will attack. 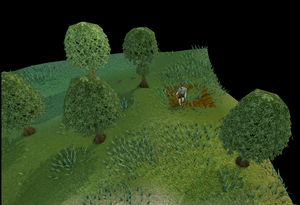 Tolna enters the dungeon with fear.

In this room, players must search the dark holes to find and kill the fear reaper.

The fear reaper will be in one of the 6 dark holes that you can "look-inside". Once you have found and killed it, it will move to another dark hole at random.

Every time your player kills a fear reaper, they will become less afraid of the creature. Note that your progress will reset if you exit Tolna's Rift by any means (including logging out). After you've killed five you will get another cutscene and one of the black holes will turn into an exit. Go into this for the next room.

TIP: The fastest method to complete this room is to check every dark hole moving in a clockwise direction around the room. When you kill a fear reaper, remember to re-check the hole it came out of, as it could have randomly moved to the same hole. 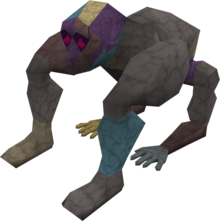 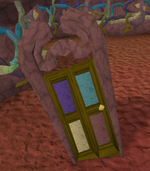 This room represents Tolna's confusion by flabbergasting players, because doors lead nowhere and some beasts cannot be hurt.

The key to pass this room is not related to any of the 6 "confusing doors", but the five Confusion beasts.

Four are fake. Upon attacking them the player receives a message, "Does this creature really exist?" as the player's attack registers 0 damage. After hitting them 8 times and not doing any damage, they will disappear with the message, "That monster wasn't even real!" When you kill the authentic creature, there will be a message, "Those other monsters were just hallucinations!"

Once you kill the real beast, all 5 will respawn and one of the confusion doors will disappear. Upon any respawn, the location of the authentic beast becomes randomised.

Fortunately, the authentic beast is fairly easy to determine. It is the only one that takes damage, the life points bar shows above its head and is the only one that makes a sound when it is hit. Further, if the player is low level the real beast will be the only one whose level is in yellow instead of green. This may or may not be in effect for higher level players. Killing the authentic beast produces a respawn of all 5 creatures. Before the Evolution of Combat, a player could only attack one beast at a time due to single way combat. But this is no longer the case, and therefore high level players will find it easiest to attack each confusion beast in rapid succession until the real beast is found. 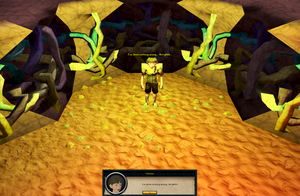 You must kill the real beast 5 times before the next flashback appears (where the boy finds himself alone in the cave, feeling "hopeless") and you are allowed to leave through the only "confusing door" left after the other 5 disappear.

If a player is finding it hard to determine the real creature, because they have low accuracy and it is taking too long to make the creature disappear, one can trap a creature behind a door, and use a ranged or magic attack to attract another monster, to test if it is the real one.

This room represents Tolna's hopelessness, because some players give up when the hopeless creatures won't die and the bridge may not appear.

In this room, players will find five Hopeless creatures. Each has three forms and therefore needs to be killed three times to make them die permanently. The hopeless creatures will get smaller every time you kill them. An easy way to kill them quickly is to use dwarf multicannon after Dwarf Cannon quest. Warning: you will lose the cannon but can get new one from Nulodion for free. Players are not advised to eat while fighting these as eating anything will heal the creature 75% of its current life points, although higher levels shouldn't need to eat at all in this part. 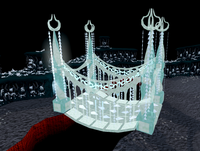 The Bridge of Hope

When they have all been killed, the Bridge of Hope will appear. 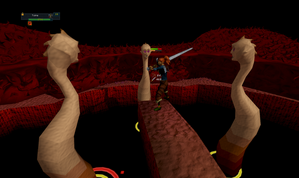 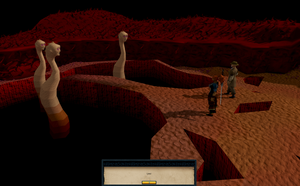 After crossing the bridge, players will see a short cutscene involving Tolna's father pleading with his son, and then must defeat the inhuman version of Tolna, a three-headed monster.

Each of the three level 39 heads can attack with either range or melee and poison. They are easier to defeat with range or magic rather than melee as attacking any head with melee will place the player in range of all three heads which will then attack simultaneously. Players with a higher constitution level will have no problem with any choice of attack. Protect from Melee or Deflect Melee may be used for players to safely melee the monsters. 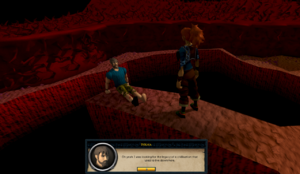 Tolna returns to his human form after the player defeats him.

Once you have defeated the heads, Tolna will become human again and thank you. Talk to him and he will return you to the surface. Talk to him again on the surface to complete the quest and receive your reward.

Should players go into the dungeon (after the quest), they will enter what looks like a waiting room, able to walk into 1 of the 4 rooms (representing Tolna's rage, fear, confusion, and hopelessness) and train on the creatures there. The creatures in these rooms do not behave the same as they did before. The Hopeless Creatures can only be killed once, the Rage Creatures are at easier levels to fight, can be hit with any weapon and do not receive ludicrous amounts of damage, the Confusion Beasts do not poison, and all of the Confusion Beasts can be killed. None of the creatures in the rooms drop items, except for the angry giant rats which drop only bones. 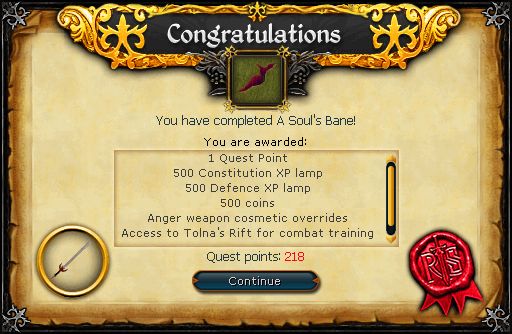 A Soul's Bane is not currently required for any quests or miniquests.