From the RuneScape Wiki, the wiki for all things RuneScape
Jump to navigation Jump to search
For the vampyre, see Solomon Lamescus.
For the wizard, see Salaman the Black.

Solomon Madini is an entrepreneurial genie that runs Solomon's General Store which sells a variety of personalisations, pets and items. His shop is found set up just south-east of the entrance to the Grand Exchange.

During the January Sales of January 2015, Solomon was seen at Edgeville, Burthorpe, and Draynor Village promoting the sales. 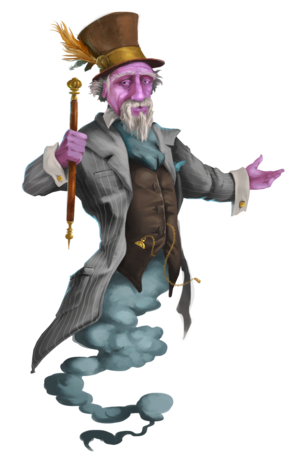 It is unknown where Solomon came from, he is supposedly the creator of the Ring of Solomon, who came into Armadyl's possession at some point before or during the God Wars. At some point in Year 169 of the Fifth Age, he founded Solomon's General Store, a boutique found inside a magic lamp located in the reality between Gielinor and Earth. This venture allows people to purchase RuneCoins which can be used to purchase various cosmetic items in his shop. Solomon's service includes shrinking his clients to fit into his lamp, creating the item they request, and then re-enlarging them once they're done, which fulfils the three wishes that Genies are contractually obliged to offer.

In Year 1 of the Sixth Age, he relocated his store to the inside of a giant elephant, found just south-east of the Grand Exchange. As before, his new store is bigger on the inside, although he no longer grants three wishes, instead, he grants three reasons to visit: the first is that his pets, clothing and ornamentation are the finest, the second is convenience, and the third is that you get to climb inside a giant elephant.