From the RuneScape Wiki, the wiki for all things RuneScape
Jump to: navigation, search
"Snowman" redirects here. For the Snowman with the top hat, see Snowman (traditional), for the snowman from the 2010 Christmas event, see Snowman (heimland).

Combat based snowmen can be healed 10 life points by pelting them with Snowballs.

Players could make snowmen themselves by building them out of snow (which creates an unfinished snowman) and then adding one of a choice of hats or and a weapon if the player is in the Land of Snow and wants to let their snowman fight. The hat (or the weapon) determines which type of snowman is made. (The snowmen from the 2010 Christmas event didn't require a hat to be added, they would come alive when the last Snowball was added.

The snowmen returned again in the 2010 Christmas event. They could be found at the Heimland Games, where they could be built with the snow, however for these you didn't need a hat or weapon to bring them alive, just adding the final snowball would bring them alive.

A single snowman is found at the ‎Land of Holly and Hawthorn with the Queen of Snow. He says that when spring comes, snowmen don't melt away; they return to the Land of Snow. 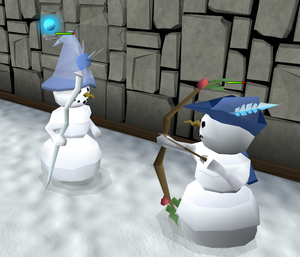 In 2011 there was a snowman battle between Wizard Grayzag/Whitezag and Wizard Frumscone, players could help one of them by building snowmen on one of the snowman patches that were on each side of the battlefield by adding snow to them. Snow could be collected from the pile of snow (or with a Snow globe if they had one), they could choose what snowman they wanted to make, a warrior, a ranger or a mage, when the player added enough snow their team's wizard would bring it to life. The goal of this minigame was to let your team's snowmen reach the other side of the field. But the other team could also build snowmen and when the snowman faced each other they would fight, you could help your snowmen by pelting them with Snowballs to heal them. When one of the snowmen died the others could walk further, when a snowman reached the other side your team would gain a point. They have 300 life points.

A traditional snowman in Varrock during the 2011 Christmas event.

Occasionally there would also spawn a group of combat based snowmen, these were escaped Frosty creations from the Wizards' Tower, players could kill these and would receive 5 Snowballs as drop. This also introduced a new type of snowman, the Snow Fremennik which looked exactly the same as the snowmen from the 2010 Christmas event.

Traditional snowmen could also be found as scenery on various places during the 2011 Christmas event, like Varrock, Draynor Village, etc.

A snowman melts after being killed.

For the fifth weekend featuring Snowman Raids, all of the combat-based snowmen appeared at certain places and dropped various rewards ranging from cabbages to dragon equipment.

The areas they spawned from include:

During the 2015 Christmas event, players could build Snow warriors, rangers and mages on the iceberg for experience.